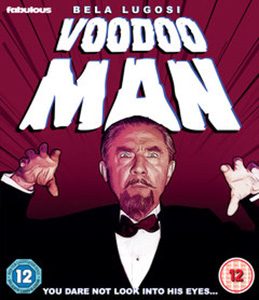 Dr. Marlowe (Bela Lugosi) has grieved over the death of his wife for 22 years, but instead of visiting her grave with flowers and kind words, he has her (still perfectly formed) body in the basement of his house, where he attempts to bring her back to life by finding a woman who will be ‘in perfect affinity‘ with her, so that he can use the power of voodoo to once again unite them.

Helping him are a variety of people, including a gas station attendant who sends women new to the area in his direction, and where they are then acosted by 2 of Marlowe’s simpleminded henchmen…one being Toby (John Carradine), whose gurning while playing the bongos during voodoo scenes is worth the price of this disc by itself.

Add to the mix a couple who are due to get married but the bride AND her friend go AWOL, inquisitive cops on the scent of the ever growing number of missing women, numerous voodoo incantations (complete with gurning Toby), and of corse Bela Lugosi who (for me at least) is always worth watching.

No blood, no gore, no frights, but Voodoo Man casts its spell on you and keeps you transfixed until the very end when….well, that would be telling wouldn’t it?