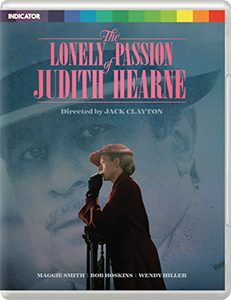 Based on the novel by  of the same name by Brian Moore, The Lonely Passion of Judith Hearne was the final film to be made by director Jack Clayton.

It’s 1950’s Belfast and Judith Hearne (Maggie Smith giving one of the best performances I’ve ever seen from her…see also The Prime of Miss Jean Brodie and The Lady in the Van as 2 other particular favourites) is a spinster whose fortunes have been better, so she moves into a boarding house trying to find work giving piano lessons to people in their homes.

It is in the boarding house that she meets James (Bob Hoskins), the brother of the landlady and who has returned to Dublin after failed business ventures while living in New York.

James mistakenly thinks that Judith has money to spare and attempts to woo her to get his hands on it, whereas Judith, despite desperately wanting love, also has to battle her craving for alcohol and her strong religious beliefs.

The Lonely Passion of Judith Hearne is riveting viewing, complete with a well deserved BAFTA winning performance from Maggie Smith. If you have an ounce of empathy in your soul, you’ll be reaching for a tissue on more than one occasion as you go on an emotional rollercoaster with her.

The narrative is depressing, with hopelessness, desperation and lost love at its core, but that is balanced with hope and never giving up. Two qualities that we should all never leave sight of.

Everything unfolds at a slow pace, but in doing so it gives you the time to get to know the characters better and to feel what they are going through…be that good or bad.

Released for the first time on blu-ray, this is the definitive version of The Lonely Passion of Judith Hearne and should be added to your collection immediately.

The Lonely Passion of Judith Hearne will be released on June 24th, 2019.