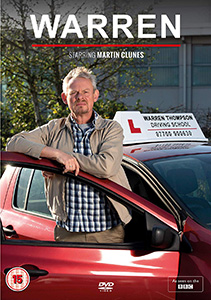 Warren Thompson (Martin Clunes) is a grumpy middle-aged driving instructor, who has moved from the South of England to live with his girlfriend Anne (Lisa Millett) and her 2 sons in Preston.

Neither wanting to live in the North of England, be competent at his job, or indeed finally propose to his long suffering girlfriend, Warren constantly finds things to moan about…much to the chagrin of those around him.

Warren is a series that will have you cringing behind your hands just as much as it will have you laughing out loud, as Clunes plays the character perfectly and there are times when you can empathise with him despite how awful he usually is…the situation he finds himself in when he stops to attend to a dead cat in the road being a perfect example of how things spiral out of his control on most occasions.

Grumpy, abrupt and completely self-entered, Warren is not a man that you would want next door, let alone as your driving instructor. His poor students often find their 1 hour lesson has been filled waiting at a garage while he has an MOT done to the car, or in line at a drive through fast food restaurant. That’s even if they are allowed behind the wheel, which one of his stepsons isn’t and is forced to sit in the passenger seat for lessons while pretending to steer and change gears.

If you like your humour to make you feel a little uncomfortable at times, and also love watching a grumpy git often spiral out of control, then Warren is the series you’ve been looking for.

I thoroughly enjoyed every episode and it has enough going on warrant many rewatches.

Warren is released on May 20th.