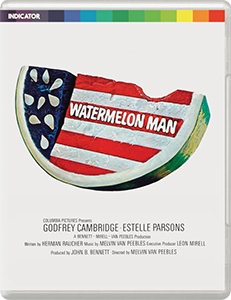 Good lord where do I start with this film?
HOW do you review a film about a black man ‘whiteing up’ to rub it off and be a black man?

Watermelon Man, directed by Melvin Van Peebles, stars Godfrey Cambridge (who in 1965 was described by Time magazine as “one of the country’s foremost celebrated Negro comedians“), and tells the story of a racist white insurance salesman named Jeff Gerber who shouts a lot and appears to be a character straight out of a 70s sitcom, and who wakes up one morning to find that he has become black. Peebles stated that the premise for the film was inspired by Franz Kafka’s Metamorphosis.

This was Van Peebles’ only studio film, and it was a financial success. Cambridge plays the role of Jeff Gerber in whiteface for the first part of the film, and this is weird, as the ‘white man’ make-up is orange and his hair is a sort of ginger colour. There are no prosthetics on his nose, so he is a black man in Donald Trump make-up. He then goes without the make-up when his character changes into a black man.

Interestingly, before Van Peebles got the directors job, the studio had told him that they were planning to cast a white actor like Alan Arkin or Jack Lemmon to play the part. Van Peebles suggested that they cast a black actor instead. Imagine Jack Lemmon blacking up? Eek!

Writer Raucher and Van Peebles frequently clashed on set, as Raucher intended the movie to be a satire of white, liberal America, whereas Van Peebles wanted to change Raucher’s script to make it a black power movie, which he failed at as Watermelon Man looks and feels like a like a sitcom.

We see Jeff Gerber in his average house with his average wife and 2 kids. He goes to his average office job all while having ‘No sympathy for the problems of black Americans’.

One morning, Jeff wakes up to find  he’s black, he scrubs and scrubs but it won’t come off, he runs around  in panic and after his wife finally seeing him,  he ventures out to the ‘coloured part of town’ in order to find a pharmacy to buy ‘the stuff they use in order to make themselves look white.’ All of which fail. He is black.

We then see him go to work, his boss is delighted because now they’ll get lots of black customers, and the sexy foreign secretary hits on him because, well we all know that black men have a huge penis.

This is a comedy and it’s played for laughs all the way through (in fact canned laughter over the jokes would not sound put of place) and Godfrey’s gooning is so 1970s it seriously dates the dialogue of the film, and not in a ‘hip’ way.

As the story progresses the laughs dwindle, as Jeff is accused of robbery while running alongside the bus to work; the policeman assuming that since he is a black man he must have stolen something. His doctor suggests that Jeff might be more comfortable with a black doctor. He gets constant phone calls telling him to ‘Move out, nigger’. On returning home after work he finds the neighbourhood lynch mob waiting who offer him $100,000 to leave, which he does, without his wife and kids.

Finally accepting he’s now black and it’s not going to wash off, Jeff resigns his job, buys an apartment building, and starts his own insurance company. He then, over the space of a minute, morphs into the stereotypical black dude: sharp suit (in other words very bright) and a ‘black man’s swagger’, then the very last scene shows him practicing martial arts with a group of black men.

It’s a curious film, very much of its time and worth a watch just out of interest.

I used to live in Los Angeles and write about Rock bands. Now I live in wonderful Wales and write about films. I like video games (especially RDR2) and am also a painter...gratuitous plug: follow my art account on Instagram @artbytinar
Review: Cisco Pike Spotlight Reflection: The Golden Child