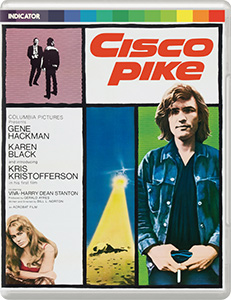 Cisco Pike is a 1971 drama film that was written and directed by Bill L. Norton, and released by Columbia Pictures. The film stars Kris Kristofferson as a musician who, having fallen on hard times, turns to the selling of marijuana and is blackmailed by a police officer (Gene Hackman).

It’s the early 70s and after a recent arrest for drug dealing, singer Cisco Pike (Kris Krisofferson) tries to pawn his guitar. The shop owner refuses and a dejected Cisco returns home to find his recent demos have been rejected.

Meanwhile crooked cop Detective Holland (Gene Hackman) has stolen a suitcase full of high-grade marijuana from a Mexican gang, he decides the only way to get rid of it is to bribe Cisco into selling it for him, so he can pay off his gambling debts.

Giving Cisko 3 days and a get out of jail card for doing this, the film follows Cisko’s picaresque adventure selling drugs around the little known spots of LA. where he meets some interesting characters and shags most of them, while not giving girlfriend at home (Karen Black) a second thought. Hey, this was the 70s man.

His old band mate and heroin addict Jesse Dupre (Harry Dean Stanton) turns up to hang around/help him (you can guess how he ends up).

This is very much a film of its time, the language and settings are a snapshot of 70s L.A. around the time The Doors (Ray Manzerek pops up in the film) and Janis Joplin ruled.

Indicator releases are always interesting films and this is another one to add to their cannon.

I used to live in Los Angeles and write about Rock bands. Now I live in wonderful Wales and write about films. I like video games (especially RDR2) and am also a painter...gratuitous plug: follow my art account on Instagram @artbytinar
Review: The Woman/Offspring Review: Watermelon Man