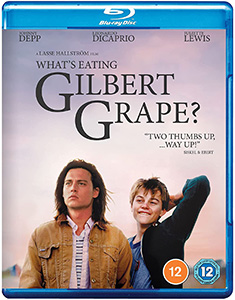 Gilbert Grape (Johnny Depp) lives with his two sisters, his mentally disabled brother Arnie (Leonardo DiCaprio), who is about to turn 18 and his obese mother Bonnie (Darlene Cates) in a small town where nothing really happens and everyone knows their neighbours business.

Gilbert is the ‘man’ of the family, as their dad ‘disappeared’ (committed suicide) years before in their basement.

Bonnie is so fat she hasn’t got off the couch since he died, leaving Gilbert being responsible for his mentally impaired younger brother’s welfare.

Gilbert works at Lamson’s local store and is having an affair with an older married woman, Betty Carver (Mary Steenburgen).

Then he meets Becky (Juliette Lewis).

What IS eating Gilbert Grape? His life, his destiny. He is trapped by circumstance and there seems to be no way out. He makes fun of his fat mother, holding kids up to marvel at her size. He meets his friends, shags the neighbour and takes care of his brother, yet underneath there is a real sense of hopelessness.

Depp’s performance is understated, gentle and effective, and Di Caprio just shines as disabled Arnie and gives a nuanced and truly sympathetic performance.

I suppose the only way to describe What’s Eating Gilbert Grape is as a beautiful quirky story of humanity in all its love and suffering.

It’s been a long time since I’ve seen this film and it’s lost none of its power, and none of its hope.

Just make sure you have a box of tissues handy.

I used to live in Los Angeles and write about Rock bands. Now I live in wonderful Wales and write about films. I like video games (especially RDR2) and am also a painter...gratuitous plug: follow my art account on Instagram @artbytinar
Review: Blame it on Rio (Remastered) Interview: Jim Wynorski