Review: Blame it on Rio 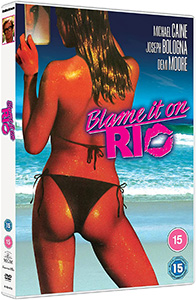 Until this upcoming Fabulous Films release dropped through the letterbox here at 60MW Towers, I’d not even heard of Blame it on Rio, never mind watched any of it. And after sitting through it all I’m still not sure if that was a good thing or not!

On the day Matthew and his family are due to fly to Rio, Matthew’s bored wife Karen (Valerie Harper) tells him that she won’t be joining them and she’s off on a trip by herself for a month to “think things over”.

Jetting off to Rio with just Nicole, his best friend Victor (Joseph Bologna) and Victor’s teenage daughter Jennifer (Michelle Johnson), Matthew and Jennifer fall in love and have sex…quite often. Something which I never got used to seeing, no matter how many times it happened.

As if shagging your best mates daughter behind his back wasn’t enough, there are other shenanigans going on that I won’t spoil for you…you can discover the rest for yourself.

Helping to pass the time while constantly picking your jaw up from the floor while you watch, you can play a game of “guess when Michael Caine’s perm will appear again“. As all the way through the entire movie his hair constantly changes from scene to scene, alternating between his usual curvy locks and a tight 80’s perm…continuity be damned!

If you’ve ever wanted to cringe when watching a movie while also being strangely fascinated by it at the same time, then Blame it on Rio is definitely the one to go for.

Blame it on Rio is released 13th September 2021 by Fabulous Films.