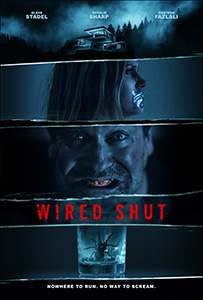 Reed Rodney (Blake Stadel) is a famous author whose latest novel is not getting good reviews. His life is in a mess thanks to alcohol abuse and an accident which has currently left him with his jaw wired shut and drinking liquids to sustain himself.

Recovering alone at home, his hopes are raised when his estranged daughter comes to visit, though her intentions may not be entirely honourable, leaving him wondering who he can trust when the situation begins to inevitably escalate out of control.

Wired Shut is a slow paced thriller, and by that I mean slooooooow paced thriller, where even minimal lines of dialogue are drawn out and with pauses so long in scenes you could go and make a cup of tea (and go to the loo) in the time it takes something (anything!) to happen.

The 90 minute running time seemed like 900 as the narrative was slowly drip fed onto the screen.

Admittedly it has a moody visual style and a haunting (though over used) music score, but there needed something more to be happening to keep me from constantly looking at how long was left…which seemed to be longer every time I looked at the clock!

I applaud anyone for actually getting a film made, and every project is made with the best intentions, but Wired Shut unfortunately failed to give me any entertainment at all. Even the wait for some blood splattered action wasn’t worth it for what was eventually shown.

Your opinion may well of course be different upon watching it, just be prepared for everything happening at a pace a snail wouldn’t have any problem keeping up with.

Review by Dave from a disc kindly supplied by 101 Films via Aim Publicity.

ALAN PARSONS : ‘The NeverEnding Show – Live In The Netherlands ‘ Review: The People Next Door