Review: The People Next Door 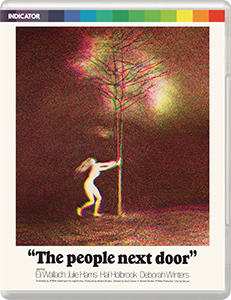 Directed by David Greene from JP Miller’s 1968 made for TV play, The People Next Door is an interesting watch, mainly for its portrayal of a contemporary American family who deny their daughter is an addict.

Brought to us by Powerhouse Films from a new 4k transfer of the original print, it tells the story of the ‘The Masons’; a middle class family headed by Arthur (the wonderful Eli Wallach), who is the stereotypical late 60s post war American dad…a binge drinking, right wing bully.

Arthur wants to be like the family next door; David and Tina (Hal Holbrook and Cloris Leachman) and really wishes that his kid sensitive pro-rock muso Artie (Stephen McHattie) could be like their kid…annoying go-getter son Sandy (Don Scardino).

What Artur and is wife Gerrie (Julie Harris) don’t know is their daughter Maxie (Deborah Winters) likes LSD. When Maxie overdoses, Arthur blames Artie for bringing drugs into the house and throws him out. Arthur can’t believe Maxie is an addict and coddles her, denying that it’s a real addiction.

It may have been ground breaking at the time, the portrayal of parents not getting ‘the kids’ and the kids hating the parents for ruining their lives. It also holds a mirror up to the double standards of the older generations: drunk, affairs and lies, while expecting their children to act with moral fortitude.

The story seems to blame Maxie’s  incarceration in a mental hospital on her addiction, the film not really touching on mental illness. Unfortunately it takes itself very seriously and is VERY dated….in a groovy 1960s way, and there’s no real mention of race or the Vietnam war.

Powerhouse Films and their ‘Indicator’ series of titles always release films I’ve never seen and this is another one to add to the list. It’s not one I’d rewatch, but  it was interesting nevertheless.

I used to live in Los Angeles and write about Rock bands. Now I live in wonderful Wales and write about films. I like video games (especially RDR2) and am also a painter...gratuitous plug: follow my art account on Instagram @artbytinar
Review: Wired Shut Review: Blame it on Rio