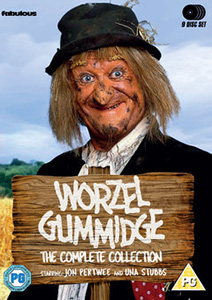 For all the background history that you need to know about Worzel Gummidge, then please read this review by Tina of the fantastic Christmas Special (which is also included in this box set) which was released late last year.

I’ve been a big fan of Worzel since it first hit the television screens here in the UK in the 1970’s. I even went so far as to try and speak “Worzeleeze”…think ‘Klingon” but without as many guttural snarls…and without having a forehead that looks like a Cornish pasty…though it wouldn’t surprise me if Worzel did indeed have a head tucked away in the barn somewhere which resembled some sort of pastry based snack.

Yes, the head swapping, Aunt Sally chasing, short tempered scarecrow from Scatterbrook farm is here in all his glory in this complete collection 9 disc DVD box set from Fabulous Films.

Seasons 1-4 originally aired on ITV between 1979 – 1981 and are absolute classics of children television, and I use the phrase “children television” in the loosest possible sense, as I thoroughly enjoyed rewatching them all as an adult.

A cup o’ tea an’ a slice o’ cake is a fun romp (as you have already read from the aforementioned review by Tina) and wonderful viewing at anytime of the year, but especially as a Christmas treat.

Worzel Gummidge Down Under Seasons 1-2 sees the cast relocate to New Zealand after Aunt Sally is sold in an antiques shop in the UK by a Kiwi museum curator, and while it doesn’t quite hit as many beats as the original series, thanks to the great cast, there is a lot to enjoy.

Jon Pertwee is superb as Worzel (let’s get it right, John Pertwee was superb at everything) and the love of his life Aunt Sally is brilliantly portrayed by Una Stubbs…rebuking every advance that Worzel innocently throws her way.

Babara Windsor, Billy Connolly, Bill Maynard and Lorraine Chase are just some of the actors who come into this amazing world originally adapted for television by Keith Waterhouse and Willis Hall from a series of books by Barbara Euphan Todd, which were published between 1936 – 63. All of the ensemble cast bringing life and laughter to each of their characters.

This is not only a fabulous trip down memory lane for all original fans of Worzel on the television, it is also the best way to introduce a new generation of fans to Worzel and his friends…just watch out for any young ‘uns in the room when Worzel changes his head for the first time!

Sit the family down with cups o’ tea and slices o’ cake and enjoy this big slice of wholesome family entertainment.