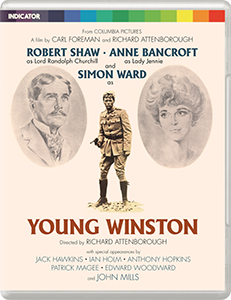 Richard Attenborough continued his war journey after ‘Oh, What a Lovely War!’ with his 1972 Young Winston (Churchill) based on Churchill’s book My Early Life: A Roving Commission, the movie gives young Winny the Hollywood treatment and examines his early life from an unhappy time at boarding school and ending his election to Parliament at the age of 26.

It looks wonderful, and let us not forget that Churchill is, and will be forever seen, as a true hero of Britain, and this film does nothing to dispel that (although a lot of his actions were questionable, a quick online search will enlighten you).

Simon Ward plays Winston as a golden haired, enthusiastic youth. Disliked by his father Randolph (Robert Shaw) and somewhat smothered by his socialite mother Jennie (Anne Bancroft) (interestingly my sister Jennie is named after her!). This is one of those great British films that has the cream of British actors paying all the parts. It is the most perfect Sunday afternoon film, perfect family viewing and makes you want to stand and salute at the end.

Again the best thing about the film is the package Indicator have put together, and even if you have no real interest in the subject, the depth of extras is really something. If you ARE a fan, then you’ll be in Churchill heaven watching all the extras.

I used to live in Los Angeles and write about Rock bands. Now I live in wonderful Wales and write about films. I like video games (especially RDR2) and am also a painter...gratuitous plug: follow my art account on Instagram @artbytinar
Rants R Us: Pilot show Review: Rage 2