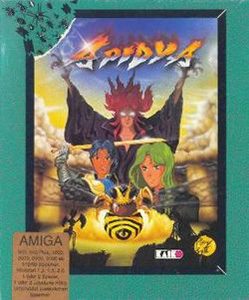 There are lots of reasons why I love writing retro reviews for 60 Minutes With. One of them is that it gives me a reason to go back and play games that I loved when I was growing up. Another reason is because sometimes I play a game that I think not many people would have heard about and I get to tell you, dear reader, what I think.

On this occasion I think it stands a good chance that not a lot of people will have played, let alone heard of Apidya on the Amiga, which is a shame because it is a damn good game!

The story is that the evil Lord of black magic, Hexaae, sends a swarm of a thousand mutated insects to wreak havoc amongst loving couple Ikuro and Yuki. Yuki is poisoned and Ikuro vows to find a cure by transforming himself into a bee. Let’s face it, the story is completely bonkers and the cutscenes have a very Japanese Anime style.

Apidya is a side scrolling shooter similar to games like R-Type and UN Squadron. As a comparison you can read my review for UN Squadron here. What makes Apidya stand apart from other side scrolling shooters is the unusual story and setting. That and the fact that you aren’t a standard spaceship or fighter jet but a bee fighting other garden creatures. I can’t think of many games where you play as a bee except for Buck Bumble on the N64.

The game has similar gameplay to the aforementioned games in as much as when you shoot enemies they leave upgrades for you. This means your standard attack becomes more powerful which is essential if you want to progress in the game, especially against the tougher enemies. If you hold down the fire button for a few seconds you fire a missile which resembles a giant turnip! This would be strange in any other game but it’s not out of place in Apidya.

It’s been a few years since I last played Apidya and I still find it completely strange playing as a bee fighting other insects. Where else do you get to fight against giant snails, mosquitos, ladybirds, ants, butterfly’s and beetles that fire their dung at you? It’s fair to say I absolutely love the garden setting and fighting against these garden dwellers feels very unique. Some of the bosses you face off against are fantastic including a mole which shoots fireballs at you and a giant praying mantis.

The later levels are very strange where you find yourself flying through the sewers fighting maggots sprouting from a dead rat carcass. A boss from this level sees you tackle a demonic doll which is enough to give you nightmares. There is also a completely bizarre bonus stage which sees you flying through the air collecting angelic cherubs, whilst avoiding Devils waving pitchforks.

The other great thing about Apidya is the soundtrack by video game legend Chris Huelsbeck. I remember thinking that the music was great back in 1992 and it really stands the test of time. It is quite honestly some of the best music I’ve heard on a home computer from this era. Chris also worked on Turrican which had a stunning soundtrack.

The only problem with Apidya and these type of games in general is that when you die you lose your power ups, meaning you revert back to a standard weapon making things a lot tougher. Also, you need eyes in the back of your head and ninja-like skills because this is one tough game. I’m not bragging but I completed Apidya when I first played it all those years ago. Now I can’t even get off the first level!

Graphics – The unique garden setting and battle against the various insects, bugs and animals all look fantastic. 7

Sound – Some of the best music on the Amiga with an amazing soundtrack by Chris Huelsbeck. 8

Playability – Although Apidya is typical in many ways of other side scrolling shooters it is unique enough to make it a welcome addition to this genre. 7

Re-Playability – There was once a time when I could complete this game but now I struggle to get off the first level. However, Apidya is still a fun game to play some 24 years after its release. 7

Overall – Apidya is a great side scrolling shooter and I would encourage any fan of this genre to check it out, especially if you’ve never played it before. 7

I love video games and movies as much as I love my children. However, I'd rather face off against the worst end of level boss, and watch the scariest horror movie than visit another soft play! Thanks for taking the time to visit the website and read this review. Please send any complaints to Dave and any money to me!
Review: Line of Duty (Series 3) Movies For Juniors – Alvin And The Chipmunks: The Road Chip