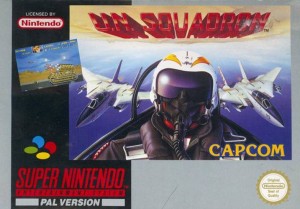 The fighting in this area is ferocious. Only fate will determine if we live or die. Only a madman would take on this mission… Lucky they found me!

So begins ‘U.N. Squadron‘ with another brilliant SNES intro showing a pilot taking off in a plane ready to face the forces of evil. I used to love watching the intros to video games when I was younger. There was something about watching all the cut scenes and reading everything in the manual that magically transported you into the game and made you a part of it.

‘U.N. Squadron’ is a side scrolling shooter. This type of game was very popular back in the day with games like ‘R-Type‘, ‘Defender‘ and ‘Scramble‘ being some of my personal favourites. There isn’t much to the story except you are a lone fighter pilot facing off against a superior opposing force. However, ‘U.N. Squadron’ has a lot more depth than your typical side scrolling shooter and I’ll explain why.

You get to pick from three different pilots from the start: Shin Kazama, Mickey Simon and Greg Gates. Greg was always my go to guy because he had a nice moustache and looked like a hard boiled fighter pilot. You start with a little money and there are planes that you can buy from destroying enemies. You can also buy upgrades before each mission. These can range from smart bombs to homing missiles. It’s like choosing your load-out before you take flight. The difference here is that certain planes have different capabilities. Such as, some specialise in downward firing projectiles and some firing backwards. The most expensive plane can do everything but it’ll take you a while before you can afford that.

Once you’ve chosen your pilot, plane and load-out you then get to choose how you want to tackle the missions. You see a map of the approaching enemy forces which can be in the shape of a plane, submarine, truck or tank. Seeing these miniature enemies converge towards your base really is a beautiful touch. If you die during a particular mission then the enemies move closer and can actually attack your base forcing you to fight them off.

Enemy types are as you would expect with planes, jets, helicopters, tanks, turrets and boats attacking you. Typically with these type of games, there are red coloured enemies which hold upgrades to your shot if you take them all down. Once you defeat the enemies you are then faced with a super-sized boss which could be a huge tank, stealth bomber or submarine. You have a damage meter and if you take a hit you have a chance to recover.

The music, sound effects and graphics are all beautiful with the sprites looking nicely detailed. The main characters look like extras from ‘Battle of the Planets‘ which is no surprise as ‘U.N. Squadron’ is based on a manga series called ‘Area 88‘.

Graphics – Beautiful graphics, featuring some nice use of mode seven. 8

Sound – Some fantastic tunes while you take on the enemies and lovely sound effects. 8

Playability – The planes handle very well and there is some real depth to this game which is unusual for a side scrolling shooter. 9

Re-Playability – This game plays as well as it did when I played it over 20 years ago. Highly recommended. 9

Overall – This is a classic game.   I had a lot of fun replaying it. It’s a tough game and you will die a lot but it really is worth playing if you get the chance. 9

I love video games and movies as much as I love my children. However, I'd rather face off against the worst end of level boss, and watch the scariest horror movie than visit another soft play! Thanks for taking the time to visit the website and read this review. Please send any complaints to Dave and any money to me!
February 2015 Entertainment Chat Review: Futureworld