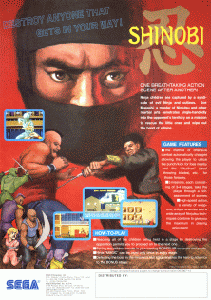 I think by now people know about my love for all things Ninja related when I was growing up. However, if you’re still a little bit unsure how I felt about these acrobatic assassins then please check out my review for the movie Pray For Death here.

Watching Ninja movies was great, but Shinobi gave me one of my first ever opportunities to actually play as a kickass Ninja. It was also one of my earliest arcade experiences and for those reasons alone, it will always have a special place in my heart.

Before I get into Shinobi I’d also like to mention a few of my other favourite Ninja games that I loved when I was younger. Shadow Warriors or Ninja Gaiden as it was called in the arcade, was a fantastic side scrolling beat-em up, where you got to fight hockey mask wearing thugs and swing from lampposts. The Ninja Warriors was simple side scrolling fun but the twist with this game was that you were a Ninja cyborg and as you took damage, your metal skeleton was slowly revealed. My first home computer Ninja experience was Saboteur on the ZX Spectrum. Your character had to infiltrate a building to steal important documents, before escaping in a helicopter and it looked amazing back in 1985.

Shinobi is a side scrolling action game which is more like a shooter than a beat-em up, as your primary weapon is a shuriken. You seemingly have an unlimited supply of these throwing stars which you fling at enemies, meaning that not only are Ninjas cool, but they also have very deep pockets as well!

The first thing to strike you about the game is the wonderful attract screen. A masked ninja appears clad in black as you see his eyes looking left and right watching for danger. Arcades had to fight for your attention and this is a very striking way to entice you to spend your pocket money.

You play a character called Joe Mushashi whose quest is to rescue kidnapped children. When I was a kid I thought that he was somehow connected to the movie American Ninja, as the lead character in that film is called Joe and he also doesn’t wear a mask which is generally unusual for your typical Ninja.

Enemies come in different shapes and sizes from standard bad guys who run at you delivering a swift kick, to knife wielding and gun toting thugs. There is even an enemy which looks suspiciously like Spider-Man as he climbs down the wall and then proceeds to jump around. It is quite amusing when you kill him as he disappears into a puff of spider web.

The general range of bad guys is very impressive and there are even Ninjas wearing frogmen suits! Hulking brutes who look like Arnie fire bazookas whilst reanimated corpses of Ninjas throw their bones at you. There are also sword throwing enemies which crouch behind their weapon meaning you have to wait for an opening before you can take them down.

Games like this wouldn’t be complete without huge boss battles and your first boss is a massive armoured warrior who shoots fire from his arms. There aren’t just Eastern themed enemies either, as the next boss is a helicopter which throws out endless Ninjas to take you down.

As well as your standard attacks you can also wield deadly Ninja magic, which instantly kills all the enemies on the screen and does massive damage to the bosses. This comes in different forms from lightening shooting out of your body, to clones of you flying around the screen wiping out everything in your way. Joe is able to jump into the foreground and background meaning you have to keep your eye on where the bad guys are coming from. When you rescue the children you receive an upgrade to your shuriken which means you can do even more damage.

Another regular feature in this type of game, and in general games from Sega, are the bonus sections. In Shinobi you are in a first person view with two tiers of enemies running towards you. You see your hand and the object of the game is to fling shurikens at your enemies before they get too close. To this day I have never been able to successfully complete this bonus level and find I get swarmed before I know what is happening.

The music throughout is excellent featuring a soundtrack with a mystical eastern tone running through it. The sound effects are also spot on and as you can imagine with this being a game featuring martial arts, it has the right amount of “hiyah” shouts from the main character.

I have to give special mention to the Sega Master System version of the game which I loved as a kid and still own.  Obviously it doesn’t match the arcade in terms of graphics and sound but where it does improve on the arcade is that it introduces a health meter meaning you can get that little bit further instead of one hit kills.

Shinobi is a very tough game indeed and you will die over and over again. I confess that I ended up using an invincibility cheat to help me complete the game on my most recent play-through. All I can say is that I remember pumping a lot of money into this game.

Graphics –  The graphics are generally very good with nicely detailed big sprites. The variety of enemies are also excellent. 7

Sound –  The music has a nice catchy beat with an eastern theme running through it. 6

Playability – Shinobi is very simple to pick up and play and will challenge your reflexes. 6

Re-Playability – Shinobi is still playable but it is also a very tough game so prepare to have your patience tested. 5

Overall – Although Shinobi may not be the most complex game in the world or have much depth, it does capture the feeling of being a Ninja with its characters, enemies and weapons. 6

I love video games and movies as much as I love my children. However, I'd rather face off against the worst end of level boss, and watch the scariest horror movie than visit another soft play! Thanks for taking the time to visit the website and read this review. Please send any complaints to Dave and any money to me!
Review: The Hunted Live Event: Hard Rock Hell United (Podcast Pt3)