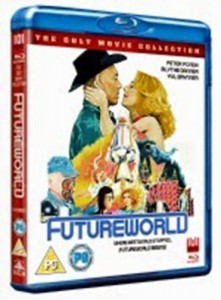 “Would I have sex with a robot”?

That’s probably not a question that you ask yourself too often, but if you were to visit Delos then it would surely be high on your list of queries, 2nd only perhaps to; “Have they REALLY fixed those robots since the crazy bald gunslinger short circuited and went on a killing spree”?

For those readers that may be wondering what the hell I’m talking about; it all began with Westworld (a movie that I have loved since I first watched it as a kid). We were introduced to the amazing resort of Delos which contained; Westworld, Romanworld and Medievalworld. These themed ‘worlds’ were populated by robots who acted out the adventures and desires of all who visited. Naturally things didn’t go to as expected and the robots rebooted into their own futuristic killing spree version of the blue screen of death. Holiday makers were slaughtered, robots were eventually shut down and Delos was ousted from its number 1 position on Tripadviser.

Cut to years later (3 years later in the movie making world) and Delos is reopening and even has the addition of other worlds; Futureworld being one of them.

To help with public relations, the owners of Delos invite the press and a selection of World dignitaries to the resort to see that it is now back to running smoothly. Among the press are Chuck and Tracy (Peter Fonda and Blythe Danner), a couple who not only have ‘history’ together, but are also following a lead that all is not as it seems in Delos.

As I mentioned earlier, I’m a big fan of Westworld and I think that my love of that movie has always coloured my judgement of this one. What I loved about Westworld is the main thing that is lacking in Futureworld; the worlds themselves! In the original we witnessed a whole range of experiences the visitors had within the worlds, and yet in this we are mostly confined to ‘backstage’ areas and the control rooms. Granted that this part of Delos contains the crux of the storyline, but watching Chuck and Tracy sneak around corridors began to frustrate me knowing that the robot populated worlds were back in action again.

It’s in these backstage areas though that we find out the ‘human element’ was to blame for Delos’ previous collapse, and that the human operators have been replaced with…robots. Certainly not something that would put my mind at ease!

Conspiracies are uncovered, while Chuck and Tracy are put in danger. Will they survive?

Richard T. Heffron’s direction is respectable but affirms his grounding in directing television projects, while Yul Brynner returns in a cameo dream sequence that makes me wish that they had made a prequel with him as the star again instead of a continuation of the timeline.

The movie is also notable for being the first to use 3D computer animation; in a short sequence involving Peter Fonda’s head…how far we’ve come in the years since!

Having said all of the above, don’t let my love of the original cloud your judgement on whether to watch Futureworld or not. Despite my nitpicking there is the foundation of a good movie here. I especially like the revelation of the ‘true’ reason why the World’s dignitaries are invited, and I’m always ready to watch anything with robots in!

101 Films have once again done a great job releasing an older movie that looks and sounds fantastic.

Review by Dave (host of 60 Minutes With) from a Blu-ray kindly supplied by 101 Films.