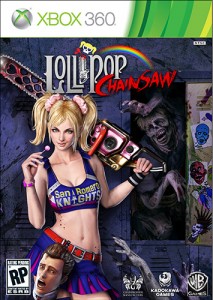 Some time ago ‘Lollipop Chainsaw‘ was mentioned on Twitter and the general consensus was this game sucks! It demeans women, it’s horrible and should be burnt at the stake. As a result I felt the need to wade in and explain why I feel that this game comes in for some fairly harsh treatment and deserves a deeper look.

Let’s get this out of the way from the start; Lollipop Chainsaw isn’t a great game. For me, the gameplay is fine, but I’ll admit that the core mechanics do get a little stale after a few hours. Saying that, I enjoyed my time with ‘Lollipop Chainsaw’ as a game that didn’t take itself too seriously and a protagonist who had fun kicking ass.

As I mentioned earlier I feel that ‘Lollipop Chainsaw’ seems to be one of those games that it’s almost fashionable to dislike. Don’t get me wrong people can like or dislike what they want, but the mere mention of this game seems to attract all sorts of criticism which makes me wonder why?

Is it because the game is purely bad and the gameplay is awful? Let’s face it; we’ve all played a hell of a lot worse games than this. Play ‘Bullet Witch‘ and then try complaining about ‘Lollipop Chainsaw’. There are plenty of broken games where the core mechanics don’t work. The mechanics in ‘Lollipop Chainsaw’ “work” for the most part and it introduces different elements to keep things interesting. It’s debatable whether it succeeds but the core mechanics are fine.

Is it because of the story? The story isn’t going to win any awards but for me this is a throwback to “classic” horror movies of the 80s such as ‘The Toxic Avenger‘, ‘Hollywood Chainsaw Hookers‘ and ‘Evil Dead II‘. Even the locations in the town are named after classic horror icons. The story was written by James Gunn who most recently directed ‘Guardians of the Galaxy‘. If you look at his back catalogue, it’s no surprise that ‘Lollipop Chainsaw’ is so demented. He’s worked on Troma movies, directed ‘Slither‘ and ‘Super‘. The latter movie being extremely weird and messed up. ‘Lollipop Chainsaw’ wears its horror roots on its sleeve and isn’t ashamed about who or what it is.

Is it because of the sexualisation of the character and language? For me, the lead character is a strong female who saves the day and kicks ass. She isn’t exploited by anyone as far as I can remember. In fact she is always saving her boyfriend who is weak and powerless. I suppose he is a decapitated head that hangs from her waist but that’s beside the point. Is it because you can look up her skirt until she tells you off? Hell, nobody forced you to do it and it probably says more about you than it does the game if you did that. Solid Snake is a complete pervert but nobody moans about him.

The videogame world is normally so male orientated that it was refreshing to play as a female who saves her boyfriend and the town she lives in. Yes, the language is puerile and stupid but there are plenty of other games out there which are equally offensive which don’t seem to garner as much attention. ‘Shadows of the Damned‘ for example is equally as “offensive” but doesn’t get anywhere near as much stick as ‘Lollipop Chainsaw’. Why is that? Is it because it’s told from a male perspective and the lead is a man? The lead character constantly says “I am Garcia Fucking Hotspur” or getting his big boner out! Hell, even Cane and Rinse did a show on ‘Shadows of the Damned’. His quest to rescue his girlfriend could be construed as being offensive. She is weak and powerless. She is sexualised all the time and usually scantily clad in lingerie.

I haven’t played enough of ‘Bayonetta‘, any of ‘Bayonetta 2‘ or ‘DMC‘ but the general consensus is that these games are technically far more superior to ‘Lollipop Chainsaw’. Bayonetta comes under considerable scrutiny for her character, but again those games seem to be acceptable whereas ‘Lollipop Chainsaw’ is dismissed for its depiction of women and vulgarity.

I understand that ‘Lollipop Chainsaw’ isn’t for everyone, but I think it deserves a little bit more slack. It’s not perfect by any stretch of the imagination, in fact it could be described as mediocre. But is the video game world better for its existence? Yes, in my opinion. A game that doesn’t take itself seriously and has fun with a female lead who doesn’t give a flying F is ok in my book.

I love video games and movies as much as I love my children. However, I'd rather face off against the worst end of level boss, and watch the scariest horror movie than visit another soft play! Thanks for taking the time to visit the website and read this review. Please send any complaints to Dave and any money to me!
Review: The Manchurian Candidate Review: The Island of Dr. Moreau