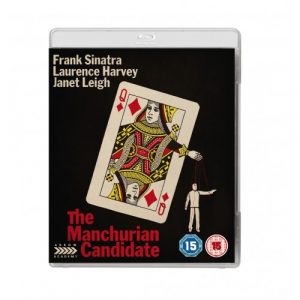 1952 and an American patrol is captured by Chinese communists during the Korean War, with the help of Russian scientists/spies, one soldier is programmed to become an assassin.

(Very short synopsis, as I’d rather you watch this film and discover the twisty-turny story for yourself).
Unfortunately some of the wonderful Arrow releases don’t get as much gravitas from film fans as they should, and I fear that only true (and perhaps older?) fans would consider forking out for John Frankenheimer’s (‘Ronin‘, French Connection II) black and white (GOD forbid) cracking classic of a film, which is a shame because it truly is something different.
Although now ‘our’ enemy is terrorism, back in 1962, the ‘enemy’ was communism, and the script is rife with that contemporary feel of the political climate of the day, and the remnants of McCarthyism is almost palpable.

A basic ‘straight from the book’ script gives us a story that you really do have to WATCH (by that I mean no playing with your phone or getting up to make a cuppa), and you’re rewarded with a very grown up, intelligent story, that despite its age still has a shocking impact on the viewer. The acting in it is impeccable. The main leads of Frank Sinatra, Laurence Harvey and an amazing turn from the completely evil, incestuous mother, Angela Lansbury being stand outs. In fact the only moan I have about this film is the two girlfriends (Janet Leigh and Leslie Parish) who play ‘the girl’ with no real identity.

The film itself looks beautiful, which adds to the way it was filmed, which is quite quirky; close shots and sometimes an almost “video-like” feel to it, where the viewer is spying on real events but is unable to intervene. The line between reality and fiction is blurred for us, as well as the brainwashed characters.

Another fantastic release from Arrow.

I used to live in Los Angeles and write about Rock bands. Now I live in wonderful Wales and write about films. I like video games (especially RDR2) and am also a painter...gratuitous plug: follow my art account on Instagram @artbytinar
Review: The Order 1886 Review: Lollipop Chainsaw