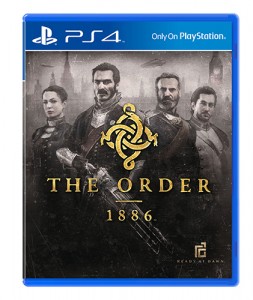 A lot has been said about ‘The Order 1886‘ prior to its release and a lot of it has been fairly negative. How long does it take to complete? Is it value for money? Is the gameplay too simplistic or as my old granny used to say, is it a case of fur coat and no knickers?

If I can put my conspiracy theory hat on for a moment, Xbox One exclusive and visual showpiece ‘Ryse: Son of Rome‘ also came in for seemingly unnecessary scrutiny and general kicking. ‘The Order’ and ‘Ryse’ share similarities inasmuch as they are visually stunning but have limited gameplay. If they weren’t exclusives to the respective consoles would they be in the firing line as much as they have been or is it something fuelled by fanboys? Either way I had a good time with ‘Ryse’ before anyone accuses me of being a “Sony Pony”.  Anyway, conspiracy theory hat taken off and writing hat put back on.

I wanted to write this review from the point of view of the punter in the street. I have no connection to the gaming industry, I paid for my copy of ‘The Order’ and I’m not a journalist. I wanted to give an honest opinion from the point of view first and foremost as a gamer. I won’t be scoring the game or giving any recommendation as reviews are completely subjective.  All I hope to achieve by writing this is to provide my insight into the game and give you my impressions.

‘The Order’ takes place in Victorian London but not everything is as you expect during that part of history.  Technology has moved on and weapons are more advanced. Think ‘The League of Extraordinary Gentlemen‘ by Alan Moore and you’ll know what I mean. If you don’t know what I’m talking about it’s basically a steampunk version of Victorian London.

You play the role of Sir Galahad, a member of “The Order”.  A secret society investigating murders connected to Jack the Ripper and fighting a war against the Lycan. As events unfold a conspiracy is apparent and Sir Galahad becomes drawn into a web of intrigue and betrayal. Now all of that sounds great, but to be honest although the story is fairly engaging it’s not going to win any prizes for originality.

A lot has been made of the graphics of ‘The Order’ and I can honestly say that it is one of the most breathtakingly stunning games I have ever seen! It really does set the bar in terms of graphics and shows what the PS4 is capable of. Ready at Dawn have really captured the setting and tone of Victorian England. There is a sumptuous level of detail that really is a sight to behold. It is definitely one of those games that you put on to show your friends and has an immediate wow factor.

The gameplay is a 3rd person shooter with some stealth mechanics thrown in for good measure. It has a good cover system with Sir Galahad sticking to walls like a terrified limpet. The combat feels decent and there are a number of weapons to play around with. So far so good. However; on the negative side it does sometimes feel like you are just pushing forward and pressing a button which leads you to a cut scene. Rinse and repeat. The game is fairly linear and there is little opportunity for exploration. However not every game has to be open world and full of collectables. It also has instant fail quick time events, plus it uses the same mini puzzles again and again. Also there probably isn’t any replay value unless you want to mop up the trophies. There is also no multiplayer option, but this isn’t particularly important as games don’t always need multiplayer as this can take away focus from the main campaign. A perfect example of this is the recent ‘Wolfenstein: The New Order‘ which has no multiplayer options to speak of and benefited as a result.

I appreciate I’ve probably listed more negatives than positive but the question I keep coming back to is did I have a good time playing ‘The Order’ and the answer is yes. Is it going to win any awards for originality, no. Have you played games like it before, yes. Should you give it a try, well the only person who can answer that is you. The word I would probably use to describe this game is cinematic. Video games are often described as cinematic or developers aspire to make their games as cinematic as possible. My opinion in this is that it’s fine as long as it isn’t detrimental to the gameplay itself. ‘The Order 1886’ treads a very fine line between being almost too cinematic and lacking engaging gameplay. I can’t fault their ambition to deliver a big blockbuster experience which verges on the cinematic (there I used that word again) but whether it succeeds is debatable.

My finals thoughts are that there are a few things for you to consider if you want to buy this game. How badly do you want it? Let’s face it if you were like me and had the level of interest as I did you wouldn’t be reading a review deciding whether to buy it. You’d have bought it already.

Do you have a passing interest in the game? If so then maybe play a bit more of your backlog and grab this when the price drops. Regarding whether it is value for money; I’m not going to insult your intelligence or presume to tell you what to do with your hard earned cash. Only you can decide if you believe it is worth the money. For the record it took me approximately 7 to 8 hours to complete. I took my time with the game and died a fair few times. Even if I had completed the game in 5 hours as has been suggested, so what!?  A games length shouldn’t dictate its value.  That alone is your opinion.

Oh and one final thing. The kind man at Game attempted to sell me a guide for ‘The Order’. Maybe the young whipper snapper thought this old git needs all the help he can get. Trust me, you do not need a guide for this game.

I love video games and movies as much as I love my children. However, I'd rather face off against the worst end of level boss, and watch the scariest horror movie than visit another soft play! Thanks for taking the time to visit the website and read this review. Please send any complaints to Dave and any money to me!
January 2015 Entertainment Chat Review: The Manchurian Candidate