Review: A Haunting at Silver Falls 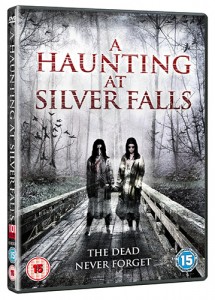 Following the death of her father, Jordan (Alix Elizabeth Gitter) goes to Silver Falls to live with her aunt and uncle.  As you can imagine, Jordan struggles with her new way of life, making friends, going to a new school, walking in on her guardians getting it on – the usual struggles of a teenager in a new environment. That all turns out to be the least of her worries as Silver Falls holds a dark secret.

During one evening at a gathering Jordan’s boyfriend explains Silver Falls is ghost city USA.  Apparently there have been a number of deaths and are legends of ghosts prowling the woods. Jordan is separated from her boyfriend and gets lost in the woods (naturally) happening to find a ring on the floor. Jordan accidentally puts on the ring and then finds she cannot take it off.  Unfortunately for her the owner of the rings wants it back. Cue the ominous music. Of course when things do start to take a turn for the worse, nobody believes Jordan and she is sent to see a psychiatrist who just happens to be the father of her new boyfriend.

A Haunting at Silver Falls feels at times like ‘Dawson’s Creek’ the horror movie.  High school students trying to figure out their own feelings as well as things going bump in the night, and I’m not just talking about Jordan’s pot head sex addict guardians.

There have been plenty of vengeful ghost movies such as ‘Dark Water’, ‘The Grudge’, ‘The Sixth Sense’, and even the excellent ‘The Hole’ from Joe Dante.  ‘A Haunting at Silver Falls’ shares similarities with all of them. I’m the first one to admit that teenage horror movies aren’t really my kind of thing however ‘A Haunting at Silver Falls’ has some effectively tense moments. The director, Brett Donowho, adds a sense of dread and pacing which elevates it above your standard B movie fare.

‘A Haunting at Silver Falls’ is a movie I would suggest is aimed at a young teenage audience and not necessarily a nearly 40 year old man like myself.  It has enough tension and scares for a younger audience and isn’t filled with gore which is refreshing these days. I would imagine my 15 year old self would be terrified watching this with my friends.  Saying that, I watched ‘A Nightmare on Elm Street‘ when I was 11 years old so probably not. Still, if you are a fan of American ghost stories you could do worse than watching this.

Review by Chris (co-host of 60 Minutes With and ‘The Same Coin’) from a disc kindly supplied by 101 Films.

I love video games and movies as much as I love my children. However, I'd rather face off against the worst end of level boss, and watch the scariest horror movie than visit another soft play! Thanks for taking the time to visit the website and read this review. Please send any complaints to Dave and any money to me!
Interview with Peter Spellos Retro Review: Alien 3