I love retro gaming! The only problem with retro gaming is that sometimes my memory plays tricks on me and I remember a game being better than it actually is. So the point of these retro reviews is to go back and play games from the past and have a fresh look at them. Do they still hold up today and would I recommend people try them? I don’t generally like review scores but I will be scoring the games as a homage to some of my favourite magazines of yesteryear. Enjoy! 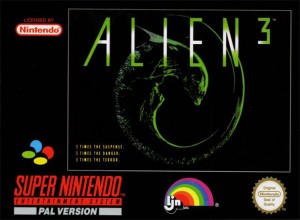 Movie video game adaptations can often be a mixed bag. For every ‘Robocop‘ there is a ‘Hudson Hawk’ and more often than not they are terrible cash ins. ‘Alien 3‘ is one of the better movie tie ins even if it does take liberties with the plot of the movie.

The excellent intro sequence bridges the gap between the end of ‘Aliens‘ and the start of ‘Alien 3’. People who are familiar with the movies will know that Ripley finds herself on an all male prison colony faced with no means of escape or weapons to defend herself from the alien that is stalking them. ‘Alien 3’ the game takes a slightly different approach in as much as you are armed with a pulse rifle, flamethrower and grenade launcher from the start.

The action takes places as a side scrolling shooter with various types of xenomorphs ranging from facehuggers to full blown aliens attacking you. There are several terminals dotted around the levels and this is where you accept various missions which range from rescuing trapped prisoners, fixing fractured pipes, turning on power or destroying alien eggs. You have one life with a 100% health bar which slowly reduces whenever you take a hit from an alien, acid or lava. There is ammo and health to be found but there is a sense of panic knowing you don’t have much ammo or health left.

The graphics and animations are generally great with a nice bald representation of Ripley. The different alien types also look good. The setting of the prison is also impressive featuring various locations taken from the movie.

The music is also excellent and the tempo increases based on the number of enemies on the screen. The sound effects also work really well with the aliens making their trademark hiss and some impressive sampled speech. The only downside to the game is a floaty jump and re-spawning enemies, but I won’t hold this against it as this is what gaming was like in the 80s and 90s.

Graphics – Ripley and the Aliens all look good and locations from the movie are used to good effect. 8

Sound – Excellent music which captures the mood of Aliens and even sounds like the classic Alien theme. 8

Re-playability – I’d definitely recommend people go back and play this especially if you are a fan of the Alien franchise.  It’s much better than Aliens: Colonial Marines. 7

Overall – a great use of the Aliens brand despite taking some liberties with the story. 8

I love video games and movies as much as I love my children. However, I'd rather face off against the worst end of level boss, and watch the scariest horror movie than visit another soft play! Thanks for taking the time to visit the website and read this review. Please send any complaints to Dave and any money to me!
Review: A Haunting at Silver Falls Interview with James Kottak