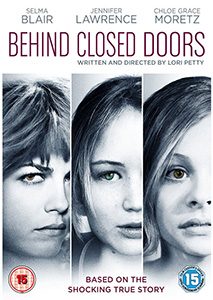 Lori Petty co-writes and directs Behind Closed Doors, a movie based on the true events of her childhood. Originally released in 2008 and called The Poker House, the movie finally reaches the UK thanks to the good people at 101 Films.

Behind Closed Doors stars Jennifer Lawrence and features Chloe Grace Moretz and Selma Blair. It’s interesting to see Lawrence and Grace Moretz before they became the big stars they are now, and its credit to Lori Petty for giving the young cast members the opportunity to shine. Lawrence plays Agnes who lives with her two younger sisters and her alcoholic, drug addicted prostitute mother played by Blair.

The movie is set in 1976 and a lot of the story is told through voice over with the 14 year old Agnes describing their day to day life of growing up in abject poverty, begging, stealing and borrowing just to get by.

Bokeem Woodbine plays the charming yet vicious pimp with whom Agnes becomes infatuated despite witnessing him beat her mother. The original title, The Poker House, comes from their home being used as a brothel and meeting point for various undesirable characters to gather. To be honest I can understand why the name of the film was changed as it could easily cause some confusion.

The acting throughout is very strong particularly from Jennifer Lawrence and Selma Blair with the latter revelling in her role as a mother, who was a victim of domestic abuse and now drinks to escape the reality of their desperate situation. I didn’t really know much about Lori Petty other than seeing her in movies such as A League of Their Own, Point Break and Tank Girl so it was intriguing to see what kind of life she had as a child, and how she’s gone onto to be a successful part of the entertainment industry, despite the trauma she experienced growing up.

Behind Closed Doors is thought provoking, well filmed and features some excellent performances but it did drag a little especially considering the running time is only 93 minutes. The narration also veers into navel gazing territory, but if you consider it’s from the perspective of a 14 year old girl I guess you can forgive this.

Winter’s Bone is often cited as the breakthrough movie for Jennifer Lawrence but I would definitely recommend people check out Behind Closed Doors to see a great performance from this Oscar winning actress.

Review by Chris (co-host of 60 Minutes With and The Same Coin) from a disc kindly supplied by 101 Films.

I love video games and movies as much as I love my children. However, I'd rather face off against the worst end of level boss, and watch the scariest horror movie than visit another soft play! Thanks for taking the time to visit the website and read this review. Please send any complaints to Dave and any money to me!
Review: Mean Guns Review: IMAX