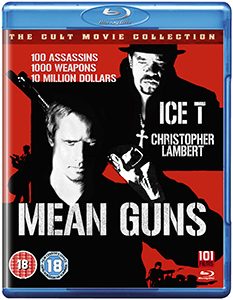 Gangster boss Vincent Moon (Ice T in a typical ‘badass’ role, though this time complete with platinum teeth that brings up visions of a gangsta version of James Bond villain ‘Jaws‘) needs a clear out of everyone that has worked for ‘the syndicate’. Rather than have them killed individually, he ensnares them all in a brand new prison that is due to be opened soon. Once inside they are told that only 3 may leave alive, each of them sharing a split of $10M. Guns, ammo and baseball bats are then tossed into the crowd and they are left to fight it out between them for who will survive and earn a share of the money.

Mean Guns is rated 18 over here in the UK and reading the synopsis above may well give you expectations of a bloodbath as dozens of criminals fight to the death with each other using guns and baseball bats. The reality is somewhat different. There is a lot of gunfire. Let me rephrase that; there is a LOT of gunfire…though none of it is accompanied by any sort of cheap CGI or practical blood effects. I can only imagine that they got permission to use this building but were explicitly told NOT to mess it up with any fake blood etc. This leads to numerous scenes which are reminiscent of if The A-Team had jacked up on speedballs and gone out with their van full of weapons looking for bad guys, shooting hundreds of them but with ne’er a drop of blood in sight.

Ice T is, well….he’s Ice T again; furrowed brow, spitting out his dialogue and generally hating anyone that comes within glaring distance of him. Christopher Lambert as ‘Lou’ is the main protagonist, though his actions are at times questionable (he leaves a little girl sat in the car in the prison grounds while all this is going on…an open topped car!) and I never really felt an emotional link to any of the characters as they were all assholes. Hoss and Crow (Yuji Okumoto and Thom Mathews…I still can’t see him without shouting ‘You mean the movie lied!“) are to some degree the comic relief; both vying for the most kills and swapping buddy comments with each other, that is until a love interest (Tina Cote as ‘Barbie’) intervenes and throws their trust for each other into dispute. There is also Marcus and D (Michael Halsey and Kimberly Warren) whose histories with Lou make for some swapping of allegiance’s as the battle commences, and Deborah Van Valkenburgh (who I’ve always enjoyed watching since first seeing her in her acting debut in The Warriors) as ‘Cam’; a lady thrown into the proceedings as she was unwittingly money laundering for the syndicate. Add into this a whole load of characters that you wouldn’t want to meet in a dark alley, or indeed a bright one and you have the setup for a mass killing spree…albeit a bloodless one.

If you are familiar with the work of Albert Pyun then you will already have a good idea of what to expect, however if you’re not then you should know that he is a prolific director whose passion for cinema is without question, but not always (or some may say never) backed up with a good quality final movie.

Like the majority of the titles from 101 Films ‘Cult Movie Collection’ you’re enjoyment will rest on your propensity for low budget movies that contain varying degrees of acting ability and a storyline that may or may not make any sense at all. I for one find them to be my ‘bread and butter’ of movie watching and have done so since an early age. Not every one of them hits the mark, but you’ve got to at least give them credit for trying. Once again I find myself thanking 101 Films for releasing a movie that could otherwise have never had a Blu-ray release.