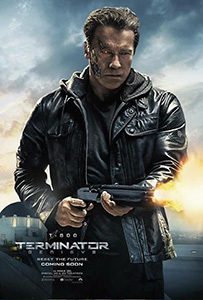 Much like the T-800 itself, the Terminator franchise refuses to die. After a strong debut with The Terminator (1984) and then blowing peoples minds in 1991 with a barrage of seldom seen before visual effects in Terminator 2: Judgement Day, the public consensus was that the franchise power cells were running low as two further sequels; Terminator 3: Rise of the Machines (2003) and Terminator Salvation (2009) faltered at the box office and caused consternation amongst the fanbase.

Terminator Genisys sees the much heralded return of Arnold Schwarzenegger back into the franchise (lets ignore the brief dodgy CGI version of him in Terminator Salvation) and the pre-release talk was all about how they were going to explain that he was now undeniably older; would more CGI be used? Would he wear prosthetic make-up? Would they somehow try to explain that a terminator can age? Well the answer is ‘yes’ to all three of those questions, but things aren’t as simple as that, and it seems the movie is raising even more questions for the audience upon leaving the cinema.

Without giving away any spoilers (though if you’ve seen the trailers for the movie you’ve already spoiled it for yourself anyway as it gives away the majority of the main story beats. Hence why I stopped watching trailers over a year ago. I watched the trailer for this when arriving home from the cinema and was amazed at what they showed!) the main thing to wrap your head around is the concept of a multiverse. Once you understand that there are concurrent timelines existing within that multiverse, each with echoes from one another, and that there are certain anomalies that allow you to pass from one multiverse to another while travelling through time, then the storyline all clicks into place.

Now I may well have just confused you even more with the previous paragraph, but my opinion is that the writers (Laeta Kalogridis and Patrick Lussier) did a damn fine job of continuing the story from Judgement Day, while at the same time opening up the possibilities for further movies and introducing more characters.

Before we get bogged down in the minutia of multiverses and time travel, let’s focus on what you’ll see on screen.

Arnie steals the movie as an ageing T-800, who despite living amongst humans for many years still can not blend in discretely. His forced smile is probably used as a visual gag a little too often, but it was a pleasure to see him once again on the big screen kicking ass. Jai Courtney and Emilia Clarke do a fine job as Kyle Reese and Sarah Connor (on a quick tangent, why the hell did Michael Biehn not become a huge movie star?) and Byung-hun Lee is a wiry (no pun intended) counterpart to the T-1000 played by Robert Patrick.

The action set-pieces are well staged and there are plenty of them, though a helicopter chase scene did veer towards watching a sequence from a video game. Despite its 12a classification there is enough action to satisfy older fans who have been with the franchise from the beginning, and let’s face it, there is no blood anyway when machine is fighting machine.

I enjoyed the references to the first 2 movies that were peppered throughout (Kyle trying the shoe against his bare foot, etc) and didn’t so much see them as a homage to the previous movies, but rather that this was another example of echoes/ripples from each multiverse crisscrossing into each other, much like we can experience déjà vu and it can be argued that we’ve already lived that scenario in another multiverse. Here we are, back to a multiverse again! This could well be the crux of how much you enjoy Terminator Genisys. Don’t go into it expecting a linear sequel, keep open minded about timelines, watch Arnie back in a role that fans love him for and embrace it for what it is; a 21st Century sequel to a 30+ year old movie that treats its core subject with reverence while also opening it up to new directions in the future.

However, like any art form be it movies, music, sculpture or paintings, everyones opinion is entirely subjective. I for one had a great time watching it and look forward to revisiting it again on Blu-ray. If you have ANY interest in the Terminator franchise then you have to go to the cinema to watch this and make your own mind up. We’d love to hear your opinions on it here at 60 Minutes With.

Special mention must also go to Cineworld Broughton. Since it opened a few months ago it has been a revelation to everyone here in North Wales. The fact that we now have an IMAX cinema just up the road has opened up a cinematic oasis to all us cinephiles that were previously floundering in a desert of blandness. Brand new movies on that HUGE screen plus eclectic showings across a broad base of subjects has reinvigorated my love of cinema…plus the seats in their IMAX are the most comfortable I’ve ever sat in at a cinema. Kudos to all involved.

Review by Dave (host of 60 Minutes With).