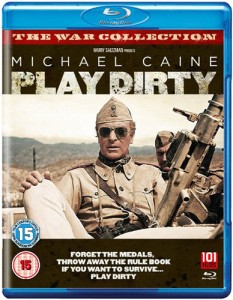 Captain Douglas (Michael Caine) is working port duty in North Africa overseeing incoming fuel supplies (mainly consisting of sipping booze and playing chess) and is reluctantly recruited into a mission behind enemy lines to blow up their fuel dump. Little does he know that the mission is just a decoy for the real mission which is running 24 hours behind them. A bad situation is made even worse when he discovers that the squad he is assigned to is made up of a motley bunch of ne’er do well’s, led by Captain Leech (Nigel Davenport). The squad encounters both harsh terrain and enemy encounters en route to its destination, and everyone is pushed to their limits both emotionally and physically.

I will not spoil the story for you anymore, suffice to say that from the short synopsis above you may well already have had 3 words pop into your mind; ‘The Dirty Dozen’ (released 2 years previous to ‘Play Dirty’). Well this certainly shares tropes from that series of movies but it would be a disservice to ‘Play Dirty’ to instantly align it to that very mucky 12.

I always enjoy watching Michael Caine and he’s certainly on top form in this; playing the role understated yet with a hint of underlying aggression (which comes to the fore in a ‘Mexican standoff’ scene which is the culmination of a previous clash of personalities with Captain Leech). Nigel Davenport as Leech is superb too, and it is the onscreen chemistry between the two actors that is the standout attraction for me. Hard-ass Leech refuses to take orders from anybody, while Douglas’ initial mild mannered temperament is pushed to the limit with each encounter that the squad endures.

I should also mention that Leech is promised £2000 to keep Douglas alive throughout the mission. This is of course at odds with Leech’s narcissistic ways, but the lure of hard cash persuades him to think of somebody else for a change.

The cast is great throughout, with special praise going to Harry Andrews as Brigadier Blore. He doesn’t have a lot of screen time but creates a character that you will be loathing by the end of the movie. Does he get his just deserts? Well you’ll just have to watch and find out…and I certainly encourage you to watch this. I would describe this as an ‘old skool man movie’, and if you enjoy the likes of ‘The Hill’ and ‘Flight of the Pheonix’ (both highly recommended too) then you will certainly enjoy this.

‘Play Dirty’ oozes more testosterone in its first 30 minutes than the entire running time of the lamentable ‘The Expendables 3’. Even the introduction of a female German nurse is shown by her throwing a soldier out of the back of an ambulance and proceeding to kick the hell out of him.

The widescreen picture looks stunning, and you can almost begin to feel the sand in your face as they make their way across desert wasteland.

I’d never seen ‘Play Dirty’ before watching this Blu-ray release by 101 Films and it is definitely a movie that I will be revisiting in the future. Highly recommended.