Review: The Adventures of Barry McKenzie

DVD: The Adventures of Barry McKenzie (1972) 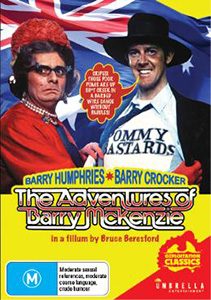 Much like the previously reviewed Australian comedy Pacific Banana from Umbrella Entertainment, the laughs in The Adventures of Barry McKenzie are elicited through humour at its most basic, so be prepared for farts, chundering (don’t worry, an explanation of the origins of that word is in the movie), putting out a fire by peeing on it, and plenty of advertising for Fosters lager.

Originally a character created by Barry Humphries (who plays several roles in the movie) for a cartoon strip in Private Eye, Barry McKenzie is an Australian guy with a love of beer and a hankering to get in the pants of most women around him…though his nerve always fails him at the final moment.

The movie (the first Australian film to surpass one million dollars in Australian box office receipts) has Barry (Barry Crocker) visiting the UK accompanied by his Aunt Edna Everage (before she became a Dame!).

It is while in the UK that Barry has many wild adventures, each one more outrageous than the last, but every one of them involving either beer, boobs, or rude songs…one of them being about a ‘1 eyed trouser snake’. That gives you a fair idea of the level at which the humour is pitched.

Guest appearances by Spike Milligan, Peter Cook, Julie Covington, and many more certainly add to the ‘ooh look who it is‘ factor while watching, but it is the unashamedly silly situations and dialogue that keeps you watching and laughing throughout its entire running time.

If you enjoyed the aforementioned Pacific Banana, then make sure to put aside some time to travel with Barry McKenzie to the UK and enjoy his frivolous Fosters fuelled escapades.