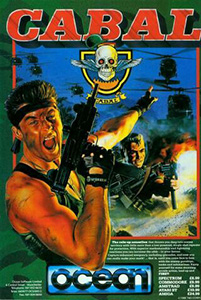 Third person shooters are ten a penny these days, with the likes of Gears of War and Uncharted being two famous examples from this genre. Back in 1988, this was a relatively new innovation, which is why I thought it would be fun to check out Cabal.

Truth be told, I don’t remember playing Cabal in the arcade. I do however have fond memories of playing a very good port on the Commodore Amiga. I always remember Cabal as one of those lazy Sunday afternoon games, which you could put on for a quick blast, and complete in 20 to 30 minutes.

Cabal is a shooter, which gives you and a friend the chance to face off against waves of enemies. As I mentioned, the action takes place in third person, so you can see the bullets and projectiles coming your way. It’s worth mentioning, the very good Sega Megadrive game Dick Tracy did something similar in 1991.

One of the interesting challenges you face is not being able to move and shoot at the same time. Your character can move freely, but to fire back at the bad guys, you have to remain stationary. This gives you the chance to move your crosshairs across the battlefield, and mow down everything in your path. To help you out, there is a handy roll move, which allows you to temporarily escape the line of fire.

Your character starts off with a bog-standard machine gun, which is good enough for soldiers, but tanks and helicopters take a bit longer to destroy.  Every now and then you are awarded a shotgun, or rapid-fire machine gun.  These are devastating and wipe out everything in their path! These special guns only last for a few seconds, but they are so effective, it almost feels unfair to use them. You also carry a number of grenades, which are useful for destroying tanks, planes and helicopters.

There is cover to hide behind and buildings which can be destroyed. Your cover can be shot down, which leaves you exposed to more danger.

Cabal features five stages, with four levels within a stage. The final level makes you face off against a boss. This can be a submarine or heavily armoured truck. The bosses themselves are fairly straight forward, with the exception of the final boss on stage five. This took me ages to beat! The reason being if you die, the boss regains all of his health, and you don’t regain any grenades you may have used in your previous life.

One of the most memorable parts of Cabal is when you defeat the enemies and move onto the next level. Imagine you have slaughtered dozens of bad guys leaving a wake of destruction in your path. The appropriate thing to do would be to stoically move on to the next phase. The makers of Cabal had other ideas, as you do a happy dance across the battlefield, accompanied by a cheerful ditty. This has to be seen to be believed, and always raised a smile, despite its juxtaposition to the death and carnage.

Graphics: The levels all look similar, but there are different enemy types which help to keep things interesting. 6

Sounds: The same music plays throughout, but you will mostly hear the sounds of gunfire. The cheerful tune when you beat a level is very funny.  5

Playability: Cabal is a lot of fun to play. The gameplay is challenging and fairly varied, with the rolling and shooting taking centre stage. 7

Re-Playability:  You can complete the game in about 30 minutes, but it never outstays its welcome or gets boring. 7

Overall:  Cabal always reminded of the final scene in the Schwarzenegger movie Commando, as you relentlessly mow down enemies to get to the next stage. It’s a fun little game, which I still enjoyed playing after all these years.  Well worth checking out.  6

I love video games and movies as much as I love my children. However, I'd rather face off against the worst end of level boss, and watch the scariest horror movie than visit another soft play! Thanks for taking the time to visit the website and read this review. Please send any complaints to Dave and any money to me!
Acorn.TV Launches This Week in the UK on 29 April 2020 TROPE release Tears For Fears classic, ‘Shout’