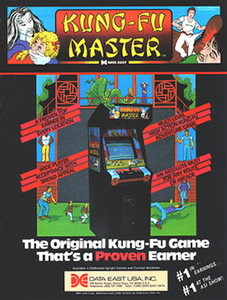 Thomas and his girlfriend Sylvia are minding their own business when they are attacked by a gang of thugs. Before they can say, “chop suey” Sylvia is kidnapped by the evil Mr X, but what the gang don’t realise is that Thomas has more skills than Liam Neeson in all three Taken movies! Thomas is a Kung Fu Master who will stop at nothing to get his beloved back in his arms.

Kung Fu Master is one of those games that is very simple to play and difficult to put down. Thomas must make his way through five levels taking on different enemies including knife wielding thugs, snakes and flame throwing dragons. These enemies are dangerous enough but are nothing compared to the end of level bosses that stand in your way.

I think the reason why I enjoyed Kung Fu Master so much when I was a kid was because the main character resembled Bruce Lee even down to his kicks and punches. You could even argue that the story of Kung Fu Master copies the Bruce Lee movie Game of Death where Bruce has to scale a tower facing off against different bosses.

I hadn’t played Kung Fu Master in a long time and I was surprised just how much fun I had with the game. Although Thomas doesn’t have many moves at his disposal his kicks and punches were responsive and the controls felt very good.

Kung Fu Master is a very tough game as you are attacked by an endless supply of bad guys who are intent on stopping you. In fact, if you watch the video below you will see just how crap I am at the game! Just make sure there aren’t any kids around when you watch it as my language is a bit fruity!

Another memorable feature of the game is the excellent music which helps to drive the action forward. The tune is so catchy that after playing Kung Fu Master I was humming it to myself as I was walking down the street.

I have very fond memories of Kung Fu Master as it was one of the first arcade games I played along with Shinobiand Wonder Boy. It manages to stand the test of time and remains one of my all-time favourite games.

Graphics: Simple graphics that is both stylish and timeless with an iconic main character. 7

Sound: Classic music that drives the sense of urgency as you ascend the tower to find your girlfriend. 7

Playability: Hard as nails but still a lot of fun to play. 7

Re-playability: The fact that this game still holds up 35 years after it was originally released tells you everything you need to know. 7

Overall: Despite the tough difficulty Kung Fu Master is still a cracking game and well worth checking out. 7

I love video games and movies as much as I love my children. However, I'd rather face off against the worst end of level boss, and watch the scariest horror movie than visit another soft play! Thanks for taking the time to visit the website and read this review. Please send any complaints to Dave and any money to me!
Soundcheck: Movie songs Review: Killer Klowns From Outer Space