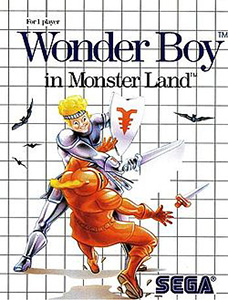 There are lots of video game characters and franchises that have ups and downs over the years. They can either have mediocre games which sequels improve on the original or, have incredible success which turns into abject failure with fans longing for the good old days. Sonic is one such character that comes to mind. The Sega mascot has endured over the years with some incredible games, but soon found himself a victim of poor sales and even poorer reviews.

A video game series that went from strength to strength, with each game being better than the last (on the Sega Master System anyway) was Wonder Boy. You can read my thoughts on Wonder Boy here but, I thought it would be good to see how Wonder Boy in Monster Land improved on the original.

Firstly, Wonder Boy in Monster Land is more of an action role playing game (RPG) whereas Wonder Boy was more about simply running and jumping. There are elements of the original game, however you can now buy different items to help you in your quest.

There is gold to be found and you are rewarded with more as you kill the different types of enemies. One of the many great things about Wonder Boy in Monster Land is the numerous shops where you use gold to buy different types of armour, boots, shields and swords. This plays a massive part in your success or failure, as deciding where to spend your money, depends on how well you will do. Better armour means you can take more hits, better boots mean you run faster and jump higher, shields are essential to stop arrows and better swords mean you do more damage.

Although we take upgrading characters for granted and almost expect it these days, back in 1988 it was fairly ground-breaking to have the ability to change how powerful you are. It especially blows my mind that Wonder Boy in Monster Land started its life as an arcade game. I find this strange considering arcades were designed to take your money quickly with simple games, rather than fairly deep RPG’s where you can upgrade your character.

There are other shops available where you can buy equipment such as bombs, tornadoes, fireballs and thunder to damage enemies. You can even go into a tavern and buy a drink where the bartender will provide you with a hint or piece of information.

Graphically the game looks very bright and colourful with the music matching the atmosphere, including some catchy tunes. The only gripe I had with Wonder Boy in Monster Land was that the jumping was quite difficult and you had to be very precise. This could be quite frustrating especially when having plenty of health is essential. Although I suspect that had I bought some better boots, it may have been easier.

I used to play through Wonder Boy in Monster Land all the time until I became an expert, knowing all the secrets and beating the bosses with my eyes closed. In fact, one of my favourite memories is from when I was 13 years old. I went around a school friends house and we went to see his mates. They owned Wonder Boy in Monster Land and they couldn’t get very far. Imagine, five young boys sat on a bedroom floor and I played that game from start to finish in one sitting. By the time the credits rolled I felt like a God and for that reason alone Wonder Boy in Monster Land will always have a special place in my heart.

Graphics – Bright and colourful graphics that I always associated with the Sega Master System. 7

Sound – Some catchy tunes accompany the gameplay and suit the tone of the game. 6

Playability – Although the RPG elements maybe basic by today’s standards, they add a great deal of depth to what could have been a simple side scrolling platforming action game. 8

Re-Playability – I’m very happy to say that the game is still really fun and it isn’t just nostalgia playing tricks on me. It is tougher than I remember, especially the jumping. 7

Overall – Wonder Boy in Monster Land is a really special game for me and will always have a place in my heart. It is still a fun game and was improved upon even more with Wonder Boy 3: The Dragon’s Trap. 7

I love video games and movies as much as I love my children. However, I'd rather face off against the worst end of level boss, and watch the scariest horror movie than visit another soft play! Thanks for taking the time to visit the website and read this review. Please send any complaints to Dave and any money to me!
Review: Delicious Interview with Gary J Tunnicliffe