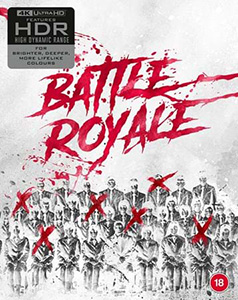 Battle Royale: the film that not only spawned a sequel, but is also responsible for a glut of video games which are either a “Battle Royale game”, or at the very least have it embedded as one of their playable modes.

It wouldn’t surprise me if a large portion of the PUBG or Fortnite players have never heard of the film, let alone watched it, but thankfully Arrow Films have now released the definitive version for everyone to enjoy.

Based on the 1999 novel by Koushun Takam, a future Japanese government captures a class of ninth-grade students and forces them to kill each other under the revolutionary “Battle Royale” act.

Over the course of 3 days, 42 students battle it out with each other on a deserted island, with only the random limited supplies and weapons they were allocated before being released on the island to help them survive.

Escape is impossible due to the explosive bands they have put on their necks, which will detonate should they try to leave the island, and there can only be 1 person left standing at the end of the 3 days or else everyone is killed.

Some choose to still find a way to escape, some attempt to survive with groups of friends, while others just go off on a frenzied killing spree. Whatever they choose though, the outcome is usually very bloody.

Controversial upon its original release, Battle Royale still packs an emotional punch, especially as you watch kids doing everything they can to survive while also battling the mental demons of their actions.

Featuring the Original Theatrical Version and Special Edition Director’s Cut of Battle Royale from the original camera negative, as well as 2 versions of the sequel (‘Requiem’ Theatrical Version and the ‘Revenge’ Special Edition), a CD featuring the complete score to Battle Royale by Masamichi Amano and the Warsaw National Philharmonic Orchestra, and a host of informative special features about both films, and you have a set that is a must buy for all fans of the films, as well as anyone who is new to them.

The 4K visuals are pin sharp, bringing to life every crevice of the island and highlighting the emotions on the faces of the kids as they desperately try to survive. A 5.1 DTS-HD master audio envelopes you, keeping you guessing where dangers may be as sounds appear around you, before filling the room as the weather changes and storms come in.

The sequel isn’t well received compared to the original, and while I too find it an unsatisfactory experience, I must admit that this new UHD release did bring an extra level of enjoyment while watching it.

Beautifully packaged with superb transfers and special features which will keep you informed and entertained for a very long time, this UHD release should sit proudly within anyones collection.