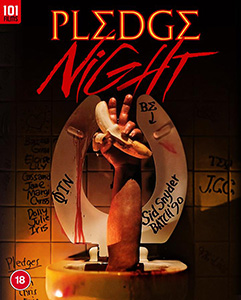 Released at the backend of the ‘slasher’ craze that was popular within the horror genre during the 1980’s, Pledge Night wears its influences proudly on its bloody sleeve, with silly humour, outrageous deaths, and a heavy metal soundtrack featuring Anthrax.

A college fraternity (frequented by the usual array of ne’er do wells who mostly look far too old to still be in education) are in the middle of hazing their new pledges during “hell week”.

Unfortunately for all involved, a pledge who was tragically killed in a bath of acid at the frat house 20 years previous has come back from the (un)dead to get his revenge. Cue lots of panicked people running around trying not to get killed.

Released on Blu-ray for the first time in the UK, Pledge Night throws everything onto the screen in the hope that some of it works. And mostly it does…depending on what your cinematic tastes are.

The first half plays out like a low rent version of Animal House, with lots of jokes about girls and also mens bottoms…including a scene where the pledges have to move cherries from blocks of ice using just their bare buttocks, with the loser having to eat the cherry. That’s about as highbrow as it gets.

While the latter part tries to incorporate as much as it can from every slasher film that went before it…though just not as well.

Despite its low budget, corny effects, wince inducing acting and derivative plot, Pledge Night just about gets away with everything and becomes an enjoyable watch, mostly due to its tongue being so far into its own cheek it’s a wonder it didn’t break through it in yet another splatter of onscreen blood.

This is the epitome of “beers and mates” films, with laughs a plenty as everything unfolds before you.