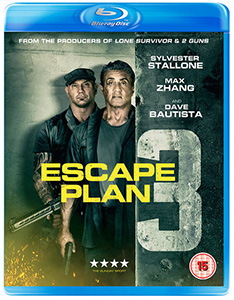 After the God-awful Escape Plan 2: Hades (known here at 60MW Towers as ‘Escape Plan 2: Bag of Shite’), the expectations for a 3rd instalment in this franchise were so low that a snakes belly looked down on them.

However, the latest adventures of Ray Breslin (Sylvester Stallone) far exceeded those expectations.

Damning with faint praise? Possibly. So allow me to  elaborate.

Escape Plan 3 not only gives Stallone more to do than in the 2nd one (in which he was essentially a narrator), it also ties in more with the original movie.

When the daughter of a Hong Kong tech executive gets kidnapped and taken to a remote prison, it transpires that the kidnap plot is all part of an intricate plan to get Ray Breslin involved, as the head of the prison has a long standing feud with Ray that he wants to bring to a violent end.

When Ray’s girlfriend also gets imprisoned, it is left to Breslin to once again assemble a trained team to infiltrate the prison and put an end to this once and for all.

Escape Plan 3 looks, sounds and narratively progresses far better then the dogs dinner that was its predecessor, and under the direction of John Herzfeld, the higher quota of onscreen action has a gritty (and bloody) edge to it that has sorely been missing.

Sly once again defies Father time and shows that even in his 70’s he can kick ass with the best of them, and there is also Jin Zhang and Harry Shum Jr. who have some great martial arts action too.

Devon Sawa plays the bad guy with all the finesse of a pantomime villain, but this works perfectly within the context of the story. While Dave Bautista is AWOL throughout most of the movie, his return to the action in the 3rd act is well worth the wait just see to the damage that he can do with just one gun.

Escape Plan 3 will never be put into anyones “Top 10 Sylvester Stallone movies”, but it does punch far above its weight to give an enjoyable and entertaining 97 minutes where you actually care for the characters and also wince when the fighting begins.

One thing to look out for while watching it is the amount of scenes where people are sat at a table. Make it into a drinking game and have one every time you see it happen. You’ll be passed out before the end credits!

A solid action movie that has finally eradicated the bad memories of ‘Escape Plan 2: Bag of Shite’. Let’s leave it at 3 though please Sly.