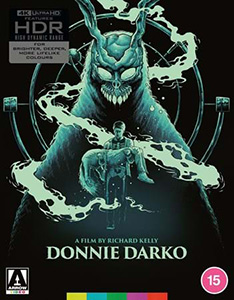 I normally like to start my reviews off with a little synopsis, just to get you in the mood. However, sometimes this is impossible, either because any information about this film will give the plot away or, as in the case of Donnie Darko, not only would I give the plot but would also have to write about God, time travel, ghosts, possible alien intervention and various theories about … this film, and most of all I would confuse the hell out of you if you’ve never seen it. Much loved since its release, I suppose one could call this a cult film, but it’s more than just quirky and oddball. Director/writer Richard Kelly treats the viewer as an intelligent being, able to make his/her own decisions on the meaning of this film and interpret it themselves.

Kelly was 26 when he made this film and his youth and fearlessness comes through in both story and direction. Turning his gaze on Middle America in the 1980’s, incorporating paedophilia and religion along with time travel and mental illness was a brave move. Couple that with no clear explanation for the events in the story and you have a film that will affect you, whether or not you ‘understand’ it. The acting in this film is of course top notch; a very young Jake Gyllenhaal is amazing as the laconic, smirking and sleepy eyed Donnie. Special mention to Holmes Osborne as Donnie’s awesomely funny dad Eddie.  Also Patrick Swayze, acting against type and doing a great turn as sleazy Jim Cunningham.

My one complaint about the story in this movie is the character of Roberta Sparrow/Grandma Death. I always feel there should have been a little more of her. She seems to be central to the story, but perhaps more of her would make the story more tangible and ruin it.

There are two versions of this movie included in this 4k UHD Arrow Films  release. One is the original theatrical cut, and the other the longer directors cut, which includes some deleted scenes such as the pumpkin carving scene with Maggie Gyllenhaal. It also makes the story a little ‘clearer’. For example: pages of the book written by Grandma death about time travel appear in scenes explaining why certain things are happening.

There are also an incredible selection of special features, with numerous audio commentaries, behind the scenes documentaries, and even a 100 page hardback book to sit back and relax with.

The 4K visuals really help with clarity in the darker scenes, revealing details that I’d previously overlooked in other releases, with the fine amount of film grain keeping that lovely cinematic look. The DTS-HD Master Audio 5.1 audio also had me looking over my shoulder a few times and definitely adds to the immersion.

I used to live in Los Angeles and write about Rock bands. Now I live in wonderful Wales and write about films. I like video games (especially RDR2) and am also a painter...gratuitous plug: follow my art account on Instagram @artbytinar
Review: The Chalk Garden Review: Irreversible