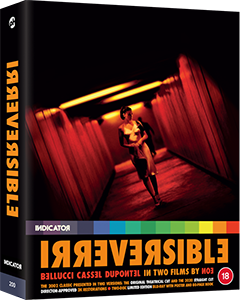 Irréversible was written and directed by Gaspar Noé and stars then married in real life couple, Monica Bellucci (Alex) and Vincent Cassel (Marcus) as partners, along with Albert Dupontel as Alex’s former boyfriend and the couples friend Pierre.

Other than that, it is an extremely violent rape/revenge movie. Irréversible has been associated with a series of films defined as the cinéma du corps (the cinema of the body), which normally have confrontational subject material and a pervasive sense of social nihilism and despair. That’s one way to describe this very emotionally complex, yet simply told story.

The film itself is one of those infamous movies that are endlessly talked about by people who haven’t actually seen it. To say it’s uncomfortable viewing is an understatement. It’s excruciating in parts. There is a ten minute rape scene where the camera is static, never moves and we are witnesses to the bitter end of this incredibly realistic rape. I’ve seen so many pieces written about this scene, from it being a work of genius to titillation and homophobic. My own opinion of it is, that you can choose not to show this horrific act, and it IS very horrible, long, and realistic, and by not showing it, make it ‘okay’, less than it is. There is no doubt at watching this act how despicable it is. Also let’s not forget, that no matter how realistic it is, it’s not real. The rape is not the core of the film, it IS the catalyst of events, but for me the heart of this film is the relationship between the three main characters and the love of the couple.

Indicator’s new release of Noe’s film has one very interesting addition (apart from the usual superb array of extras) and that is the film cut in sequence, so we see events in chronological order, and this was the version we watched for this review.

Surprisingly I found the original ‘Backwards’ cut of the film more powerful, mainly because beginning in despair and ending in sunlight knowing what all the three friends have lost is more poignant, heart breaking and brutal.

Again Indicator’s extras are wonderful.  The two versions of the film, and Noe’s commentary is a huge bonus, but the also the making of documentary is truly enlightening and hearing the actors talk about film it  – especially those two infamous scenes, gives the viewer a real insight into the film.

The BFI audio interview is also great, Cassell being charming and very cheeky (I wish they had put maybe photos of the film up instead of a black screen though!). Alexandra Heller-Nicholas short video essay is also a great addition to the whole package.

A really fantastic and well thought out edition from Indicator. An essential watch for any film fan.

Review by Tina from discs kindly supplied by Powerhouse Films.

I used to live in Los Angeles and write about Rock bands. Now I live in wonderful Wales and write about films. I like video games (especially RDR2) and am also a painter...gratuitous plug: follow my art account on Instagram @artbytinar
Review: Donnie Darko (Limited EditionUHD) Spotlight Reflection – Sledge Hammer! (SE01 EP07)