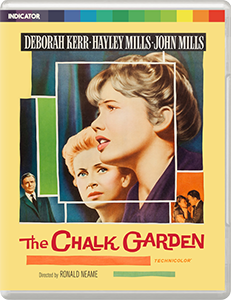 Based on Enid Bagnall’s 1955 play of the same name, The Chalk Garden stars Deborah Kerr as Miss Madrigal, a mysterious and seemingly detached unemotional woman who turns up one day at Mrs Maugham’s (Edith Evans) country home, with the hope of becoming governess to her granddaughter Laurel (Hayley Mills).

Laurel is ‘disturbed’ (naughty and spoilt), hates her mother for leaving her father and marrying another man and lives with her controlling grandmother. Oh and John Mills is the butler.

Laurel is intrigued by Miss Madrigal’s lack of a past, and tells her she will get rid of her by exposing her deep dark secret. Of course we all can guess what that secret is as the mention of murder throughout the film gets Kerr to widen her eyes and go a bit stiff.

The thing is, this film is so very ‘play-like’ that you do feel like its being performed on a stage, but its saving grace is some of the cracking dialogue between Kerr and Hayley Mills, and Kerr’s acting. She does “Ice maiden who’s about to erupt” to perfection, and dare I say…she is somewhat repressed-sexy in this film. Her clothes are very tight, her hair is up in a French knot, but she always has lipstick on and seems very available in a frosty way to John Mills.

Hayley Mills is a bit annoying but that’s more to do with the character than Mills herself, and of course Edith plays herself as usual.

I have to admit I was glued to it despite guessing all the shocks and outcome.

It’s a great package too with a fabulous array of extras, especially the great commentary from Lucy Bolton and Jo Botting, which was entertaining as well as informative.

I used to live in Los Angeles and write about Rock bands. Now I live in wonderful Wales and write about films. I like video games (especially RDR2) and am also a painter...gratuitous plug: follow my art account on Instagram @artbytinar
Review: Pledge Night Review: Donnie Darko (Limited EditionUHD)