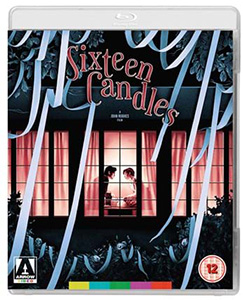 Samantha Baker (Molly Ringwald) comes downstairs on her 16th birthday and not one of her family has remembered, because her older sister Ginny is getting married the next day.

The scowl on Sam’s face remains throughout the entire film.

Sam is infatuated with school heart throb Jake Ryan (Michael Schoeffling). Jake opens up to his friend Rock (yes…Rock) and tells him he’s basically fed up with his perfect girlfriend Caroline. Meanwhile, much younger (about 14 ish? Perhaps? ) Ted (Anthony Michael Hall, stealing the whole film) is in love with Sam. She rejects him, while scowling as he is a pain in the arse – and about 13.

Oh yes, I nearly forgot Sam’s grandparents are there for the wedding and one of them has brought along Chinese foreign exchange student, Long Duk Dong (yes…Dong). The grandparents make Sam take him along to her Prom dance that very night, and surprisingly  the ‘Donger’ (yes…Donger) finds an unlikely girlfriend in the tall, Jock-like, large-breasted  Marlene.

I’ve never really been a massive fan John Hughes’ earliest films, you know the romantic geeky sort. They passed me by, probably because my dad was a striking miner and we had to sell the TV. But I have to admit I was a little amazed to see that Sixteen Candles is basically Porky’s for nice kids. Okay maybe not Porky’s, but Animal House at least.

And of course it’s of its time. Where the sullen sulky heroine actually GETS the guy (Dear LORD she is miserable). Also the female depictions  – that is, you can only be complete if you have a boyfriend/husband, doesn’t wash today.

I do get why its loved, but I think Hughes was finding his feet with this film and made it again, much better, in Pretty in Pink, and Some Kind of Wonderful.

But who I am to complain? This is again a wonderful package from the masters Arrow. Extras coming out of your yaya, and the film itself with its new 4k restoration is nothing short of breathtaking.

A must buy for Hughes fans.

I used to live in Los Angeles and write about Rock bands. Now I live in wonderful Wales and write about films. I like video games (especially RDR2) and am also a painter...gratuitous plug: follow my art account on Instagram @artbytinar
Review: Get Him To The Greek Review: Escape Plan 3