Review: Get Him To The Greek 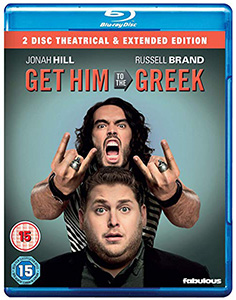 The most frustrating reviews to write are for the films that I expect to absolutely hate but end up shocking me with how ‘alright’ they are. ‘I wasn’t bored throughout its runtime’ or ‘not as tedious as it looks’ hardly shine as examples of glowing criticism to put on the front of the box but neither are they examples of scathing and brutal critical fatalities. The reviews themselves just fall as bland and as flat reads as the viewings of whatever film is being discussed.

Anyway, Get Him to The Greek.

After an ugly break-up with his girlfriend and the critical decimation of his last album, Aldous Snow goes off the rails and spirals out of controlling his seven-year sobriety. Meanwhile, Aaron (Jonah Hill, playing a different character from his hotel attendant in Forgetting Sarah Marshall), a talent scout in Los Angeles, comes up with an idea to save the failing record label he works for: hold a ten-year anniversary gig of Snow’s famous Greek Theatre performance. His boss decides to give him the chance but under one condition; Aaron must hand deliver Snow to The Greek theatre himself.

Revisiting Russell Brand’s enigmatic rock star from Forgetting Sarah Marshall, Aldous Snow, was clearly the smartest place to go from that point. Snow was clearly the most colourful character, filled with allusions to a more interesting story, behind that of Sarah Marshall. I’m somewhat happy to confirm that Get Him to The Greek is a far and vast improvement over its predecessor.

Get Him to The Greek stands as probably the most fun Apatow/Stoller film. Hill and Brand have brilliant on-screen chemistry that feels very well realised with a script as decent as this. In every way it stands head and shoulders above its predecessor, but being perfectly honest, that doesn’t say too much at the end of the day.

The problem is that it hits just a tiny little bit more than it misses and while I am happy that split is more biased towards the funny end of the spectrum, there are huge portions of this film that just go without a laugh. I found myself mostly irked by Aldous Snow when he was being a musician and not just a very extravagant heroin addict. Perhaps I can’t suspend my disbelief long enough to believe that this earth shattering, profound and provocateur of an artist holds such a status while writing some really, really shit music. Perhaps it was intended to be that way, a way of humbling Aldous into a more shallow image of a rock star, but the songs are so unbearably unfunny it’s unforgivable.

Dialogue can serve as another problem too. Snow’s downfall obviously is to draw attention to the dangers of living so close to the edge for so long and the dangers of drugs and the loneliness that the artists we love often go through. But it’s a little too obvious. Rather than showing us characters taking drugs and being sad, characters have a more of a tendency to take drugs and just announce that they’re sad. For instance, there are these scenes around the half way point where Snow shows his true nature as a drug addict, becoming violent and erratic towards Aaron, but all tension is lost when Snow tries to talk in a self-aware state about his condition like he’s delivering some kind of weird PSA.

As far as my criticisms go though, this is quite a fun film and will definitely give Brand fans a kick, while getting under the skin of those who dislike him.

The bevvy of problems and irritations that are here are outweighed by the laughs and I guess that’s all a comedy really needs to achieve.

Get Him to the Greek: I was not bored by its runtime and it was not as tedious as I thought it was going to be.

Review by Joel from a disc kindly supplied by Fabulous Films.

I like to think I'm a critic out of spite for all the criticism I receive in film school. I enjoy consuming all things entertainment and art but I enjoy pretending I could do any better even more. Jokes aside, I absolutely adore creating and interacting with all art and entertainment. Always happy to air my obnoxious opinions on games, films and music and I can only hope you also get some kind of sick kick out of reading them.
Review: Forgetting Sarah Marshall Review: Sixteen Candles