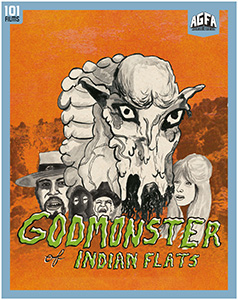 Another in 101 Films American Genre Film Archive range, Godmonster of Indian Flats tells the story of an eight-foot-tall toxic sheep monster that goes on the rampage destroying everything that gets in its way.

If you think you’ve seen everything that cinema has to show, then think again. Prepare yourself for a dogs funeral (complete with doggy sized casket) attended my prostitutes, a pie fight that gets way out of control, and a giant mutant sheep that looks like…well, you’ll have to find that out by yourself.

The narrative is disjointed to say the least, the acting leaves a lot to be desired, the script is hilarious and the cinematography is non-existent. Yet I found myself once again strangely hypnotised by yet another of these 101 Films AGFA releases.

I don’t want to spoil what lays ahead when you watch this, but come back to me when you have and let’s discuss the scene where the kids are having a picnic!

Once again this is another movie that doesn’t have mainstream appeal, but if you have a penchant for low budget indie madness, this one is well worth watching, especially when the special features contain the bonus movie of The Legend of Bigfoot.