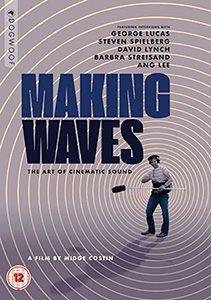 Even during the early ‘silent’ era of cinema, filmmakers were aware that sound still played an important part in bonding the audience to the screen, often accompanying their movies with ‘in house’ musicians or separate musical playbacks.

With the advent of synchronised sound, a new era of cinema began, which yielded successive iterations to the audio soundscape through into the present day.

Todays audience is spoilt in the way that they can watch movies, though it seems that ‘quantity of media consumed’ is unfortunately outweighing ‘quality of viewing (and indeed, listening) experience’.

In an age where movies are watched on a smart phone or tablet while commuting back and too to work, both the visual and aural experience is compromised. Indeed, even people who invest in a large 4k television, often don’t invest in a separate audio system.

Making Waves: The Art of Cinematic Sound highlights why going to the cinema is still the way to watch movies, while also following the fascinating history of audio in cinema.

This isn’t just a ‘talking heads’ documentary, though the people interviewed on it are indeed both entertaining and informative, this documentary dives into all of the areas involved in creating a soundtrack for movies.

Speech, music, sound effects and so much more are shown in an in-depth (yet easy to understand) way, which also shows why every segment of a movies soundtrack is so important to the whole experience.

Foley work is, as always, fascinating. Want to know how the sound of a lightsaber was created for Star Wars? How about the use of an old leather wallet? All of that and so much more is here to be discovered, as well as how music affects emotions and how onscreen sounds can give the viewer as much information about the narrative as does the visual action.

Making Waves: The Art of Cinematic Sound will not only inform you of the history and advances in cinematic sound, it will also make you reassess how you listen to a movie…and you’ll sure as hell appreciate the audio track a hell of a lot more after watching how much work is put into it.

Another superb documentary release from DogWoof.

Making Waves: The Art of Cinematic Sound will be released on DVD on November 25th, 2019.

Review by Dave, from a disc kindly supplied by Aim Publicity.

Review: Lack of Afro – You Could Do Better (feat Camila Recchio and Wax)

Review: The Allergies – Say the Word

Taking a minute after composing a haiku #GhostOfTsushima #PS4share pic.twitter.com/C9JO9LACeQ

Looking forward to chatting with writer/director André Øvredal this week about his new movie "Mortal" released by @SignatureEntUK Also have to ask a couple of questions about Troll Hunter which is a great movie. Will be released as an audio AND video show. #podcast pic.twitter.com/AkeLcBFfTz

Thanks to our wonderful webmeister @MichaelOglesby the 60MW website has had a new lick of paint. Give it a look: 60minuteswith.co.uk

@Seanakin Very pleased to have added to that number 👍👍👍

RT @DannyVaughnVox Thursday, August 6 will be another Vaughnsday on line concert!! I still have managed to find a few song surprises for you so spread the word and join us on FB live at Danny Vaughn's Myth's Legends & Lies page at… instagram.com/p/CDbDbhGIwYU/…