Review: Smokey and the Bandit – The Complete Collection 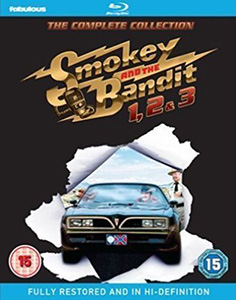 Hey Pop Kids! Did you know that in the world before hipsters, the only people who were allowed to wear beards were tramps and members of ZZ Top?

And did you also know that for most of the last century mobile phones had not been invented and the only way to talk to people on the move was via a CB radio, and drivers had to talk in code and had nicknames like ‘Professor Incontinence Pad’ and ‘The Sodomizer’?

Impressed? Want to learn more? Well let your Uncle Stevey take you back in time where life was fast and curious as we look at the world of Smokey & the Bandit.

Smokey and the Bandit.

We travel down South to meet Burt Reynolds alias the Bandit and the Bandit likes Cowboy Hats, moustaches, fast cars and the ladies. Burt has a best buddy: Cledus (probably an inspiration for the Simpsons character Cletus the Slack-Jawed Yokel) and his non de plume is ‘The Snowman’ and the Snowman drives a big truck.

Enter ‘Big Enos Burdett’ (fnarr, fnarr) father of Little Enos (played by the musical genius that is Paul Williams) a crooked politician who bets the Bandit a big wad of cash that he can’t deliver a lorry load of beer from Texas to Georgia in 28 hours. So Burt jumps in his Trans-Am and Cledus climbs into a truck accompanied by a morbidly obese Bassett Hound (the budget obviously didn’t stretch to an Orangutan) and off they go.

Cledus (played by Country star Jerry Reed) gnaws on the radio microphone while the Bandit picks up a runaway bride (Sally Field) who is being pursued by her fiancé Junior; an inbred Police Deputy with the IQ of a fence post and his daddy Sheriff Buford T Justice (Jackie Gleason). Burt is obviously smitten with the errant bride as he gives her the nickname ‘Frog’ (the smooth devil).

So that’s it really. What we get for the rest of the movie is a car chase with Buford and Junior chasing Burt and his Frog while Cledus drives his truck and talks to his dog, There are stunts aplenty as the Smokey’s* crash a lot and Burt laughs, drives fast and makes lurve to Frog as they are helped on their way by a bunch of good ol’ boys and gals.

Smokey and the Bandit Ride Again.

SOOOOOWEEEE!
Same cast, same script, only this time they have a goddamn ELEPHANT!

Burt is pissed (in the British sense) cos his woman done gone and left him for Junior and his pappy. Enter the Enos’s with another crazy old bet, this time they are seeking election for Governor of Texas and want Burt to move a mysterious trunk from Miami to the Republican Party convention in Dallas. Cledus has to sober ol’ Bandit up and attempt to reunite him with ‘Frog’ who once again leaves poor Junior at the altar.

So we get a rerun of the first film with a bigger budget in which the aforementioned hefalump (which was contained in the mystery trunk, geddit?) is transported across country aided by an Italian Doctor played by Dom DeLuise who hams up the stereotype. The Doc is needed because Charlotte the elephant is ‘with child’ and about to drop while being chased by Buford and Junior.

The Bandit apparently is dealing with the inner turmoil of being regarded as a ‘folk hero’ but through a series of impressive auto stunts and the renewed affections of Frog he eventually gets his mojo back. Meanwhile Cledus yaks gobbledygook into his radio, talks to his fat dog and enlists a multitude of trucking types to give them a hand.

Director and former stuntman Hal Needham is in his element here, relishing an opportunity to go smashy-smashy with a lot of automobiles including a cops v truckers smack down in the desert.

Smokey and the Bandit III

HONK! HONK!
This one jumps the shark. Literally!

Well if the plot was wearing a little thin in the second film I’m afraid we are down to the underlay and floorboards with this one. Burt obviously got a whiff of the script and plea-bargained his way into a 3 minute cameo, Frog has hopped off for good to be replaced by Colleen Camp who plays Dusty Trails (sic). It also seems that Hal Needham would rather direct traffic than be involved with this stinker

So when a story involves the transportation of a rubber fish you know you are in big trouble. The Enos’s (yep them again) are apparently opening a fish and chip shop somewhere and have the aforementioned tetrapod as a mascot. The bet (and there has to be a bet) involves getting Buford out of retirement to chase the Bandit across the country, hijacking the shark on the way. This of course makes little sense as Cledus is now impersonating Burt and given that his voice sounds like he has a sock stuffed in it and his moustache appears to be painted on.

So we get some scaled down stunts, including for no reason whatsoever a speedboat chase and Buford and Junior are now being thwarted by the Enos’s. It ends (and thankfully it does end,) with Sheriff Buford being victorious for once and driving off into the sunset.

This series could be defined as being ‘acceptable in the 70’s’ with its casual racism, sexism and homophobia and it’s as much of a vehicle for Jackie Gleason as it was for Burt Reynolds. There is a Benny Hill style chase involving the KKK, Sheriff T. Buford lovingly talks of punching Junior’s mother and Gleason camps it up as a character called ‘Gaylord’ for christsakes. Cops are portrayed as stupid, women as lovable but easy and the workingmen and women are all on the side of the outlaw. The films also often suffer from not knowing if they are going for the Screwball angle rather than a straightforward action comedy.

However, the original film was phenomenally successful, costing $4.3 million and grossing $126 million and was only beaten by Star Wars on its release in 1977. Also we cannot underestimate its influence: Smokey & the Bandit = Dukes of Hazzard = Daisy Duke. So maybe not being a petrol-head I’m missing something here.

So is you like a tractor pull, find stock car racing attractive and admire the wit and fashion sense of Jeremy Clarkson, this could be right up your exhaust pipe. Me? I’ll take the bus.

* Note. The police are referred to as ‘Smokeys’ as their suppressed rage often causes them to spontaneously combust. SW.