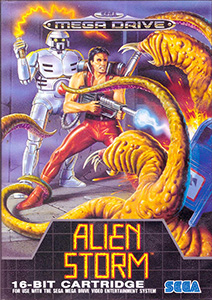 In the late 80s and earlier 90’s, Sega could do no wrong in my eyes. They would release hit after hit, including two of my all-time favourite games, Golden Axe and Streets of Rage 2. Sega generally followed a similar pattern with their games. For example, Shinobi is like ESWAT. They just swapped ninjas for futuristic cops. Alien Storm is basically Golden Axe, except you are fighting aliens rather than orcs. I’m not necessarily criticising Sega. If it’s successful, then why change a winning formula?

So, the big question for me is this. Why do I love Golden Axe so much, and have never been particularly fond of Alien Storm? Let’s find out.

You are part of an elite squad called the Alien Busters. Picture the scene. The sun is shining and the “Busters” are serving fast food out of their “disguised” truck. They suddenly get a call, and before you can say, in your best Will Smith voice, “welcome to earth”, they speed off to fight an army of alien invaders.

There are three members of the Alien Busters to choose from, including Karen, Garth and Scooter. Karen carries a flamethrower, whereas Garth favours a laser rifle. My go to character is their robot companion Scooter. He uses a laser whip to fend off the homicidal xenomorphs.

Each hero has a regular set of strikes, including shoulder barge and jumping attack. You can also collect power ups, which unleash a devastating assault, killing everyone on screen. These are unique to each character, but they essentially do the same job. Karen calls in a huge missile, Garth has an attack ship, and Scooter literally blows himself up. These can only be done when you have enough power, so timing when to use them is essential.

As you fight your way through each level, the action changes to a first-person shooter. This sees you fighting wave after wave of aliens, before switching back to the side scrolling action. There is also a run and gun section, which sees you chasing after bad guys and jumping over obstacles.

In its favour, Alien Storm has two things that make is stand out from the crowd. The first is the animation of each character. Although the Busters attacks are fairly standard, the way they execute each move is fantastic!  Scooter for example will whip an enemy, but then could pull out a rifle and shoot them. Or use his wrist rockets, and then incinerate the bad guys with his rocket feet. Each hero has a number of these animations which make them feel unique. This can be seen as a blessing and a curse. Although it looks good, it’s not necessarily great from a gameplay perspective. I find it a little frustrating, especially when you get hurt because your character does something you weren’t expecting.

The opening levels are also excellent! They are bright, colourful and filled with interesting aliens, which try to blend into the background. Slug -like creatures will disguise themselves as trash cans, only to reveal their true identity when you get closer. There are a number of other enemies in your way, including wasp creatures with big hands which throw you around, and kangaroo aliens who throw their babies at you! I thought it was especially funny when an alien dressed as a school boy (imagine an alien Angus Young from AC/DC) ran onto the battlefield.

On the face of it Alien Storm should be perfect. So why isn’t it for me?

I think the main problem is it tries to be great at everything, rather than focusing on one genre. It isn’t quite a shooter, and it isn’t quite a beat ‘em up.  For example, Contra knows its strengths are the shooting, so there is no need to add any fighting sections. Alien Storm tries to add sections similar to Contra, but these seem to be a half attempt, and ultimately it isn’t very good.

The combat in Alien Storm also never feels particularly satisfying. For example, if you slash an enemy in Golden Axe, or punch someone in the face in Streets of Rage, there is a sense of weight and heft. Whereas in Alien Storm, the fighting is very floaty, and ends up feeling like you are button mashing rather than using skill.

Even though there are only 6 levels, truth be told, I got a little bored towards the end. Although there are different sections in each level, the game felt very repetitive, and I started to lose interest.

Graphics:  Excellent graphics with the main characters being beautifully animated. The alien design is also great.  8

Playability:  A mixture of genres which ultimately don’t work very well. I have a feeling if the game had stuck to being a beat ‘em up or shooter, it would have ended up being much better. 6

Re-Playability:  The opening couple of levels are fun, but I found myself getting bored towards the end. 5

Overall: For me Alien Storm should be better than it is. There are some really nice touches including the animation and alien design. However, the main thing that makes any game succeed is the gameplay. Unfortunately, Alien Storm falls short in this department. As it stands, I’ll be sticking with Golden Axe or Streets of Rage 2, for my beat ‘em up action. 6

I love video games and movies as much as I love my children. However, I'd rather face off against the worst end of level boss, and watch the scariest horror movie than visit another soft play! Thanks for taking the time to visit the website and read this review. Please send any complaints to Dave and any money to me!
COMPETITION: Win a gift pack from Dean of the Dead Hot Horror Sauces Funk legend Maceo Parker to release first studio album in 8 years