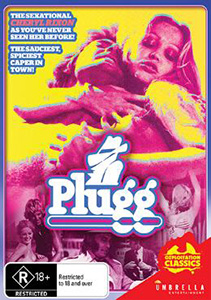 In a similar bawdy Australian vein as The Adventures of Barry McKenzie and Pacific Banana, Plugg has more than its fair share of boobs, bums, and 70’s bush on display, as private detective Horatio Plugg (Peter Thompson) is hired to watch over the exploits (sexploits!?) of the Pussycat Escorts in order for them to be shut down. Cue various parts of female anatomy being thrust in front of the camera at every opportunity.

Neither as funny, nor titillating as the aforementioned Barry McKenzie or Pacific Banana, Plugg struggles to raise even the slightest of giggles or the flow of blood to the genitals of any male viewers.

Lead man Peter Thompson resembles nothing more than a man who would get arrested within seconds of approaching a school playground; wild mutton chops flowing in the wind as he wears his dirty ‘flasher’ raincoat. Then (God help my eyesight!) he gets naked!

I tried really hard to enjoy Plugg, and low budget ‘sexploitation’ movies are usually good for at least a few giggles here and there. Unfortunately this leaves a lot to be desired in all aspects of it from the acting, direction, story, and flat as a pancake humour.

Watch the trailer below and you’ve seen all that you need to see.