Following on from Volume 1: Fear Warning, Volume 2: Criminal Intent, Volume 3: Blood & Terror, Volume 4: Faces of Fear, Volume 5: Death & Deceit, it was time once again to sit down with the latest Hammer Films boxset release from Powerhouse Films in their ‘Indicator’ series. 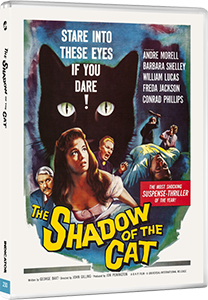 Following on from another of this months Powerhouse Films releases (Eye of the Cat), more feline shenanigans are afoot in The Shadow of the Cat.

After watching her wealthy mistress being murdered by servants under the orders of a scheming husband, Tabitha (the family cat) narrowly escapes death herself and begins to exact revenge on all the guilty parties.

With a large inheritance at stake, more family members are embroiled into the sinister plan to catch and kill Tabitha before their plan begins to unravel before them.

Director John Gilling guides the narrative with enough suspense to have you ‘almost’ believing that a cat could scupper anyones master plan. While André Morell and Barbara Shelley are as watchable as ever, no matter how inconceivable the circumstances they find themselves in become.

A great double bill with the aforementioned Eye of the Cat. 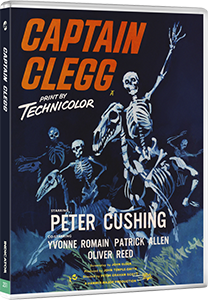 ‘Stars Peter Cushing‘ that’s all I’d need to read to get me to watch something.

How about ‘also stars Oliver Reed’? Surely that makes it a ‘must buy’ now!?

With a screenplay by Anthony Hinds and assured direction by Peter Graham Scott, Captain Clegg sees Royal Navy Captain Collier (Patrick Allen) and his crew sent to a small 18th century coastal town where the inhabitants have been reported of illegal smuggling and bootlegging.

The titular Captain Clegg (a longtime nemesis of Captain Collier) is buried in the town after being hanged for his crimes, but all is not as it seems behind closed doors…and hidden wall panels.

Beautiful sets and costumes, great performances across the board, and a fair smattering of tongue in cheek humour, makes Captain Clegg of of the best Hammer films you might not have seen.

Have I told you that Peter Cushing AND Oliver Reed are in it? 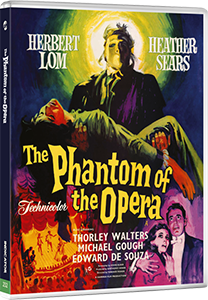 This often filmed tale is once again brought to life, this time under the directorial eye of Hammer stalwart Terence Fisher from a screenplay by Anthony Hinds.

Herbert Lom plays the titular Phantom, disfigured and living in the sewers as he plans revenge on those who wronged him, while also looking for the perfect muse to deliver his musical masterpieces to the world.

Straying somewhat more than other versions from the source material, this still mixes romance and horror in a satisfying way, though leaning more on the romantic side of the story.

Not as iconic as the Lon Chaney version, or as truly bizarre as The Phantom of Paradise, it stands up as a very watchable version of the story. 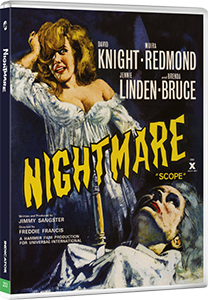 My least favourite of the set but still an intriguing watch, this Freddie Francis helmed shocker is based around Janet (Jennie Linden), a young woman, who when only 11 years old, witnessed her mother stabbing her father to death and is now afflicted by disturbing nightmares and visions.

Janet’s unstable mental state leads her to try and commit suicide, but is everything really just in her head, or are other people around her using her for their own nefarious means?

A moody chiller with some genuinely suspenseful moments, Nightmare just may give you Nightmares too.

Yet another great box set from Powerhouse Films and once again loaded with special features that will keep you informed and entertained for many hours.

THE SHADOW OF THE CAT

THE PHANTOM OF THE OPERA